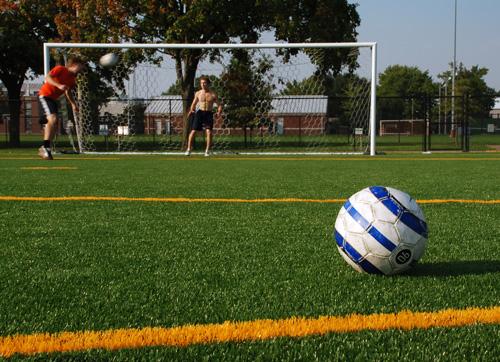 Traveling to a new country and attending a new university can be really tough. Take it from somebody who’s done it before. I spent last spring semester studying abroad in Australia, and I was the only person from the University of Illinois at my new university. I knew absolutely nobody.

Half of me was excited about the fresh start, and the other was scared to death. I’m sure many international students at the University of Illinois are feeling the same way I was. But that scared feeling didn’t last long for me. As soon as I got to campus I got heavily involved in all sorts of intramural sports.

Intramural sports are, in my opinion, the best way to make new friends. There’s no quicker way to become friends with people than being on the same team as them. Growing up, I played every sport I could and met some of my best friends in the process. I knew that was my best way to make friends in Australia.

It worked like a charm. I played the same sports I have been playing for years, and some sports that I have never played before, like Australian rules football and rugby. After practice and games, I had spent so much time with my teammates that I felt like I had known them for forever. I spent more time with them than anybody else at my university. We were in pretty competitive leagues, so we were always focused on our next game.

Meanwhile, the University of Illinois offers intramural leagues for tons of sports. It’s a great opportunity to try sports you’ve never played before, and don’t worry; they have recreational leagues for the rookies. The level of competition is lowered for people who are just looking to have fun and try out the sports.

Those are definitely the way to go if you are just trying out the sport. There’s no worse feeling than being a beginner on a team full of people who want to really take the game seriously. It takes all the fun out of it, and ultimately that is the reason you are playing.

If I had to give any piece of advice to incoming international students, it would be to get involved in as many intramural leagues as possible. Play that sport you’ve always thought about playing but never have. Get back into that sport you played all the time as a kid. It will definitely be a blast.  Not only because you will become friends with all your teammates, but since intramural leagues are friendly competitions, you will become friends with your opponents, too. There is nothing better than going out to get some exercise with your teammates and then going to hang out afterward. Take it from a guy who has done it before.

One of the main goals for all international students is to get a taste of the culture in the new country. My time traveling showed me that no other country loves their sports as much as the United States does. Sports dominate everyday life for tons of Americans, so if you like sports and want to assimilate into American culture, then intramurals are your quickest answer.