Greek life has taken over meaning of UI spirit 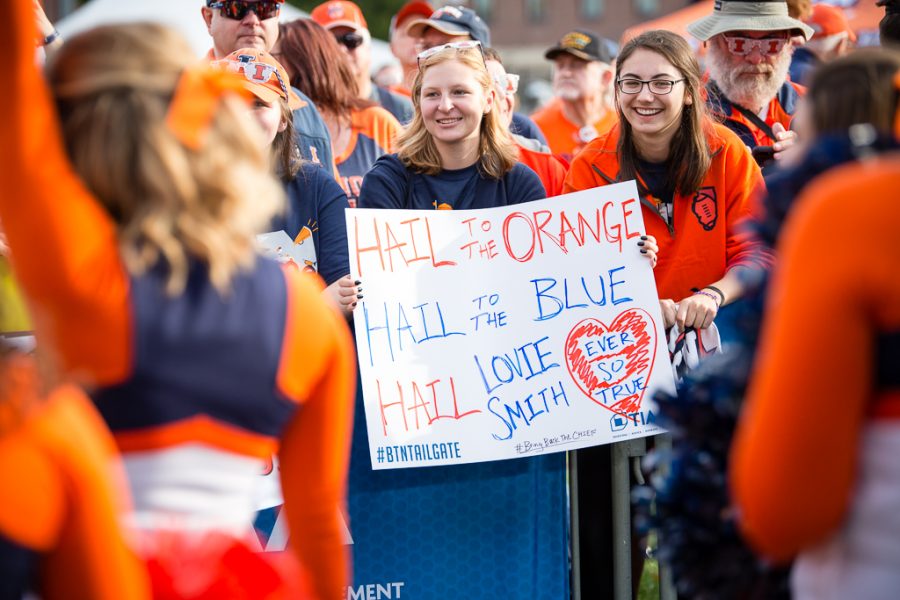 Illini fans hold up a sign during the Big Ten Tailgate before the game against Minnesota at Memorial Stadium on Saturday October 29.

Jerseys, Snapbacks and socks with sneakers. That’s the go-to look for Saturdays on Campustown. Members of the Greek community wake up early on Saturdays, head to the Red Lion and drink the day away all in the name of school spirit as the Illini play on big screens above the bar.

It hasn’t always been this way—at least that’s what my mom, a 1983 alumna, tells me. And it’s also something we’ve reported on before.

Greeks and Saturday mornings have a long history, one rooted in a singular word. Block. Fraternities pair-up with sororities to pregames and party at a specific bar, the most popular being the Red Lion. Block is a figurehead term, with a very loose definition in the block of wristbands used to get out of cover.

Now, flash back to the 1980s. Head football coach Mike White lead a successful, beloved program. Saturdays didn’t look too different. Sorority women and fraternity men still gathered for a day of drinking in honor of the Illini. However, their pregames didn’t end up at The Red Lion. Instead, they ended up at the football games, where an allocated section of seats were reserved.

Block: not wristbands, but sections at Memorial Stadium.

The 1980s showcased a block with a purpose and a name. It’s not something the current undergraduates know too much about. And there are a number of reasons why. Our sports programs are not what we often hear they are. But there’s a culture around football games that our Greek community lost quite some time ago: the tailgate.

Illinois doesn’t do anything not on massive scale. We pride ourselves as a university with about 40,000 students, Big Ten sports and bearers of the former title of No 1. Party school. We keep things exuberant. It’s part of our charm. Yet among our counterparts of similar scope, a different term describes the iconic Saturday mornings.

Gameday. No, no the store on Green Street. The retailer’s name can tell us a little bit about what’s missing from our campus. Block and Gameday are not synonymous, though they once were.

Today’s block has lost its meaningful importance. The games screened on flat screens above the bar wholly serve as background noise if they’re even playing and not silenced by a DJ.

Gameday is about school pride, tailgating alongside other students, fans and alums in the fields adjacent to Memorial Stadium. Block is too often about status. What bar you Block at determines your rank.

Fortunately, the Greek community is taking steps to revive a once lost icon of Saturdays in Champaign. The Interfraternity Council is pushing for fraternities to Block at Grange Grove. There is even a Sept. 29 free kick-off with live musical acts.

IFC isn’t the solution, neither is Grange Grove. Even if Block moves to a grassy, well-manicured field, it’s still a Greek event. To return to the illustrious pride of Illini Gameday, we need to find the pride. That takes commitment from the entire school and campus community.