Why you should get involved with Illini Pride 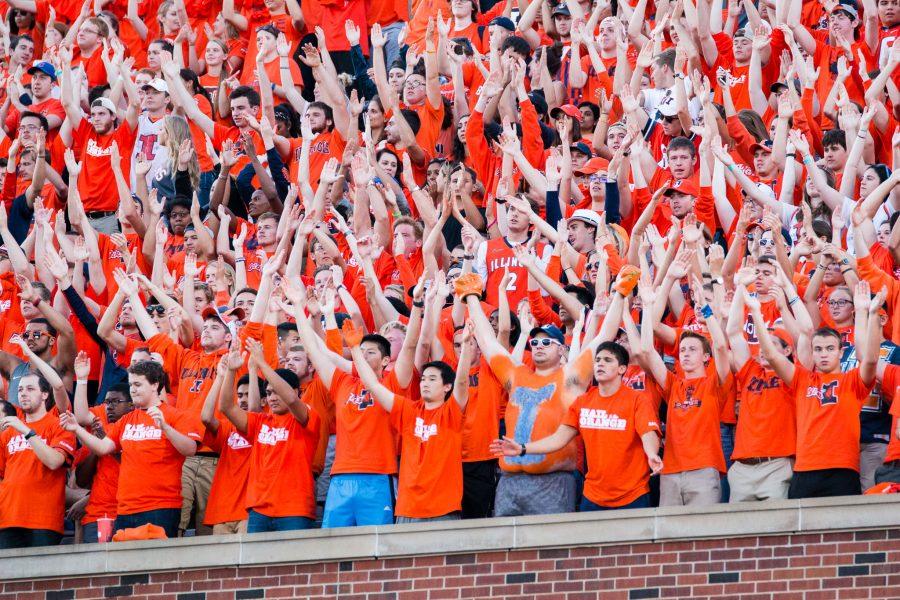 Students in the Block I student section cheer on the Illini during the game against North Carolina at Memorial Stadium on Saturday, September 10.

Watching a game on television is just a glimpse of what it is like to be part of the Illini fan experience.

Illini Pride is a cheering section for all varsity sports teams on campus. From its inception in 1977, with 300 members, the Pride has grown into the largest student organization with nearly 3,000 members.

The Pride breaks down into subgroups for the big market sports: Block I for football, Orange Krush for basketball, Spike Squad for volleyball, as well as representation in the Olympic sports.

There are quite a few things to know when attempting to get the best out of game day.

Cheers and chants are the biggest staples of any good fan section. The Illini Pride have so many to remember that it may seem overwhelming at first.

All the chants have movements that go along with them, but looking around to see what others are doing and asking the fan section veterans what’s going on is quite helpful – they are usually happy to help.

By the second half of the games, some of the cheers will start to become more familiar, and you will likely be a pro the next time around.

Up until the day you take part in the Block I adventure, watching Illini football has been limited.

During the halftime of every home football game, the Illini Pride leaders coordinate the card stunts. This gets the entire fan section involved.

Three to four plastic cards of multiple colors, mostly orange blue and white, are passed down the rows. Along with the cards are small white papers that correspond your seat number. The little paper gives color instructions for the various card formations.

Although it seems a little complicated at first, it is fun to see the designs you help create.

“Hail To The Orange,” it is played at the beginning of the game to inspire excitement, sang in the middle to let the team know the fans still believe, and screamed at the end for a victory.

This fight song will be drilled into your head, and you’ll hum it while walking across campus and scream it in excitement after the Illini win any sporting event.

According to their website, Illini Pride has become not only a group of fans cheering on a remarkable athletic program but also a group of students taking pride in the University of Illinois and giving back to the community.

Orange Krush is more than just a cheering section – each member raises money to support local and national charities to join. In its history, the Orange Krush has donated over $2 million to charity.

Joining the Illini Pride is a fun experience, one that can be imitated but never duplicated.

Tatiania is a sophomore in Media.
[email protected]