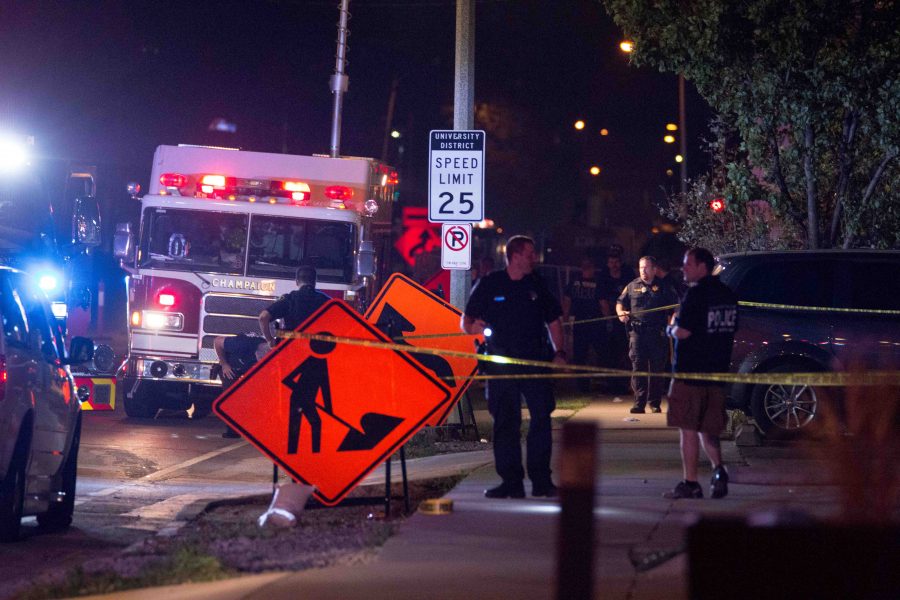 Police officers investigate what happened after a shooting that took place.

Throughout the semester, students have been confronted with the difficult truth that the University campus is not a safety bubble.

“You’re not getting away from urban situations here, they’re just on a smaller scale,” said Michael La Due, Champaign City Council member.

It’s important for students to remember that crime doesn’t disappear just because they’re on campus, he said.

“This may not be home, but while you’re in college this is where you are seven to eight months out of the year,” said Patrick Wade, University of Illinois Police Department spokesman. “So just be more aware of what’s going on in Urbana and Champaign and take some ownership of that.”

In September, the campus was rocked with news of a fatal shooting on Third and Green streets, just blocks from the center of campus. For many students, this was the first time they had seen the issue of gun violence reach campus.

“Students, we always talk about (living in) that bubble,” said Champaign Police Chief Anthony Cobb. “But I wish I could pop some bubbles sometimes and say we’ve just got to be a little bit aware of what’s going on around us.”

University of Illinois Police Department Chief Jeff Christensen said at a campus forum on gun violence it’s important for students to be aware crime can occur anywhere, including campus.

Christensen said the UIPD has partnered with Champaign Police, Urbana Police and the Champaign County Sheriff’s Office to form a Gun Task Force.

“Another thing that we’ve done is the University is [become] involved with the Community Coalition,” he said.

Out of the Community Coalition also came CU Fresh Start, a program that offers help and resources to those who are most at risk of taking part in gun violence — as long as the participants agree to put down their guns.

“We’re not going to arrest our way out of this problem, we need to do something to address the violence through the criminal justice system,” he said.

Since the campus is so close-knit with the Champaign and Urbana communities, Christensen said they all work together to address the issues facing everyone.

“The working relationship that we have in this area, compared to some of my peers throughout the country, is beyond outstanding. It’s got a good foundation and it continues to grow,” he said. “So, our turf, their turf — it really doesn’t matter.”

At the start of the semester, the UIPD began testing out different models of body cameras for their officers to potentially use.

“We have six officers that we’ve identified, two from each shift, and they’ll comprise our core group of people who are doing the testing,” said Matt Myrick, deputy chief of operations for the University of Illinois Police Department.

Officers have already been putting the cameras to use, and one officer was wearing one at the scene of the shooting on Green Street in September.

So far, the UIPD tested out two different cameras, the VieVu and Taser brands. Christensen said the department will also test the Arbitrator by Panasonic and possibly a fourth camera.

“It’s a big investment and it’s technology and everybody is in the marketplace with these, so what we get we want to make sure it interfaces with our other systems,” he said.

However, even if the department decides on a camera, there is still the issue of finding funding to pay for the cameras.

“Data storage for video footage is very expensive, and it’s hard to guarantee funds for such a significant project with such an unpredictable budget situation for our department,” Wade wrote in an email.