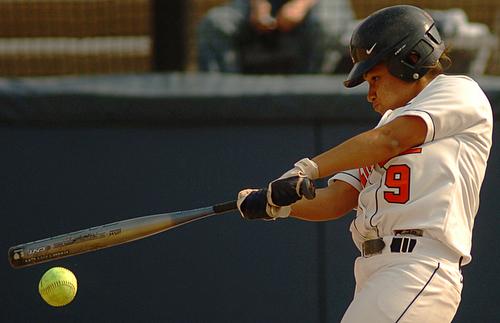 Illinois shortstop Angelena Mexicano, a junior, swings for the ball during the bottom of the first inning against University of Illinois at Chicago at Eichelberger Field on Wednesday. Illinois beat UIC 18-4. Jenette Sturges

After back-to-back weekends in the West, the Illinois softball team will return home tonight after achieving an impressive 10-3 during spring break.

Illinois dominated the field and won all five games in the tournament, including an 18-3 rout of host Sacramento State on the final day. The Illini sent 21 batters to the plate in the first inning and scored 16 runs in the frame.

California native Angelena Mexicano, a junior, went a perfect 3-3 and smacked two home runs in the first inning alone. The inning was a culmination of a red-hot weekend in which she went 11-19 at the plate and slugged four home runs and four doubles. The shortstop’s performance earned her a share of Big Ten Player of the Week honors.

“(Mexicano) was outstanding,” Sullivan said. “Most players hope to do that in a weekend or couple of weekends. She is a great offensive threat. We look for her to be a real leader at the plate and in the field.”

After a successful trip to the Coast, the team traveled back to the Midwest to play its first game of the season in Illinois.

But the Illini were unable to extend their winning streak and fell to the Illinois State Redbirds 8-7. In the top-half of the seventh, Molly Lawhead put the Illini ahead with a sacrifice fly, but the Redbirds responded in the bottom of the inning.

The next afternoon the Illini hosted Illinois-Chicago at Eichelberger Field’s Opening Day.

“It was fun to be home,” Sullivan said. “We came out enthused about playing at home.”

The Illini used five home runs to trounce the Flames 18-4. The win improved the team to 17-10 and gave the squad momentum heading into this weekend’s Diamond Devil Invitational in Tempe, Ariz.

On the first day in the desert, the Illini extended the win streak to three games by using a potent combination of pitching and a hot offense. The Illini defeated BYU 10-2 and Longwood 6-0.

Sunday morning Illinois faced Longwood for the second time in the three days and held off the Lancers 3-2. With the win, the Illini advanced to play Arizona State later in the day for the tournament championship, but were blanked 11-0.

Even with the loss, Sullivan said playing tough competition, like the Sun Devils, helps the team.

“Everyone is frustrated we didn’t get the job done,” Sullivan said. “The key is we belong on the field (with them) and we know what we have to do playing-wise to be right there amongst them. We have to keep working.”