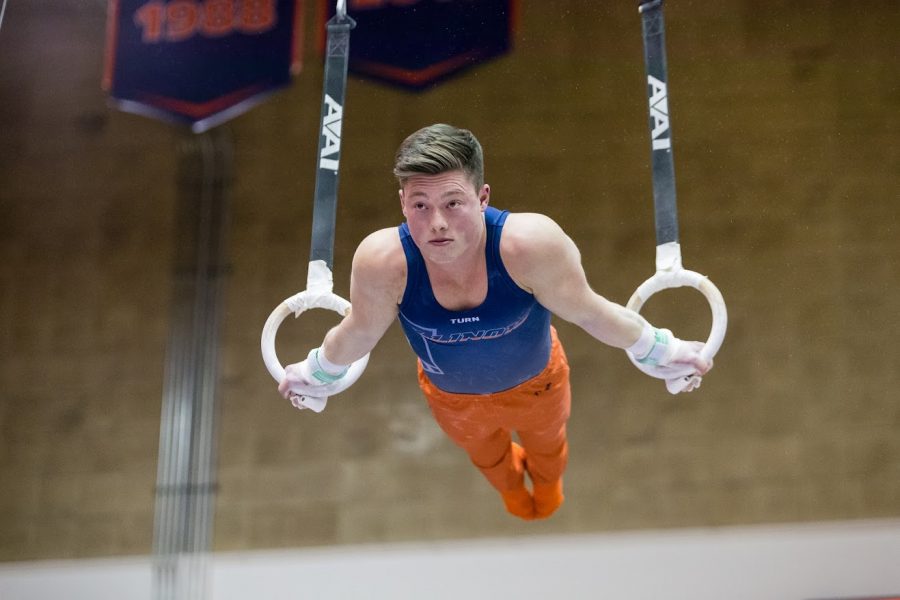 Illinois' Alex Diab performs on the still rings during the meet against Iowa at Huff Hall on Saturday, Jan. 26, 2019.

The Illinois men’s gymnastics team will compete in the NCAA Championship Friday and Saturday at the State Farm Center.

Just two weeks after the Illini came up short in their bid to be back-to-back Big Ten champions, the team will face the 11 best teams in the country as they try to break the Oklahoma Sooners’ reign of four straight national titles. Head coach Justin Spring feels optimistic about the Illini’s chances.

“We know what (Oklahoma) is capable of and on our best day, we can be in the mix for winning a national title,” Spring said.

If the Illini are going to come away with a championship, they’re going to need another great performance from senior Alex Diab. After bringing in his fourth straight Big Ten title on still rings, Diab looks to continue his success. At last year’s national championship, Diab scored a 14.500 to win the event; at this year’s Big Ten championship, Diab scored a 14.975. If he can duplicate his performance from last season, there’s a good chance Diab will win his second straight national title.

Another Illini to watch is Hamish Carter. The freshman is coming off his best performance of the season. At the Big Ten championships, Carter scored a 14.175 and came away with the high bar title. It wasn’t his highest score of the season on the high bar, but on the biggest stage, he came away with an impressive performance. Carter isn’t the same athlete who started the year by falling on his high bar routine and scoring a measly 10.650.

“To fall not once but twice in my first event representing my school is quite hard to get back up from,” Carter said. “I went to Nebraska and fell again and felt pretty disappointed. Then the next one I did was senior night where I scored a personal best. I have carried that through over the weeks.”

The Illini will also have junior Michael Paradise compete for a national title on pommel horse. Paradise fell just short of a Big Ten title and will have a chance to redeem himself when he competes against similar foes in the national championship.

The events start on Friday at 1 p.m. at the State Farm Center where Stanford, Michigan, Minnesota, Nebraska, Navy and California will compete in the first qualifiers. Illinois will compete in the following session, where the team will see Oklahoma, Penn State, Iowa, Ohio State and Army in the second qualifiers. The next night will feature the NCAA finals, where the eventual national champion will be decided; the action starts at 6 p.m.