Illini basketball alumni excel in The Basketball Tournament this summer 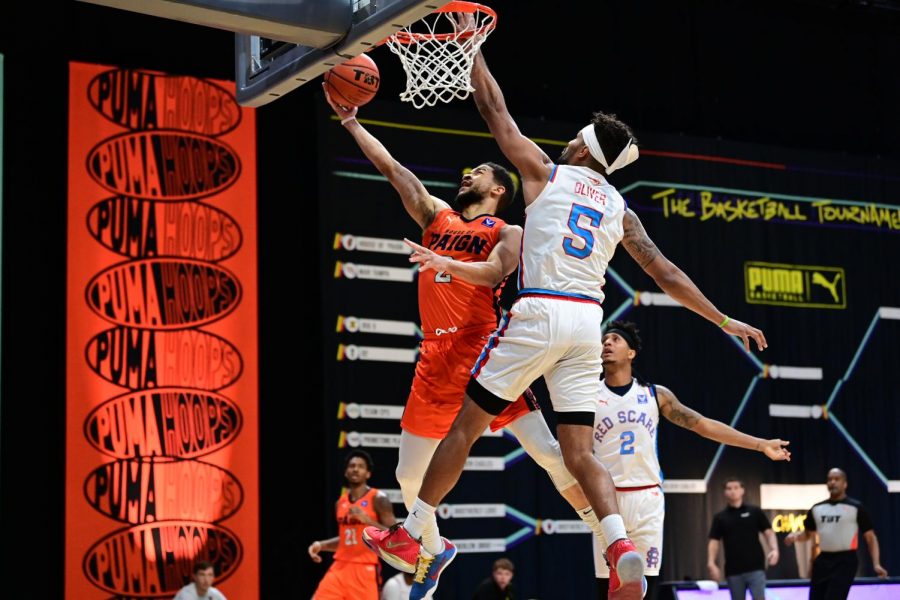 House of Paign player Billy Garrett goes for a layup during the match against Red Scare on July 10. House of ‘Paign was one of the 24 teams invited to Columbus, Ohio. to compete in The Basketball Tournament, a single-elimination style tournament.

The first couple of months this summer were hard for sports fans who missed what would have been the traditional mid-season baseball and NBA finals at the same time. As many sports were using the summer to figure out how to play amid a pandemic, one league had a successful summer season despite COVID-19. The Basketball Tournament, or TBT, was able to host a single-elimination style tournament.

House of ‘Paign, which was the team made up of many Illinois alumni, was one of the 24 teams invited to Columbus, Ohio, to compete in the tournament.

The House of ‘Paign team was made up of nine players, including six Illinois alumni and three from other schools. The Illinois alumni included Cameron Liss, Leron Black, Nnanna Egwu, Michael Finke, Malcolm Hill and, the most recent Illinois player, Andrés Feliz. The team was coached by Illini alum Mike LaTulip.

House of ‘Paign came into the tournament ranked No. 16, which drew them the No. 17 seeded team, War Tampa, for their first match of the tournament. In that first game, Mike Daum, who would become an Illini fan favorite on Twitter, dropped 21 points and 13 rebounds, leading the team to a 76-53 win. Feliz continued his scrappy and energetic play that made him so popular in Champaign, scoring 20 and grabbing seven boards.

House of ‘Paign’s defense was the key to the first game as War Tampa was held to 30% shooting from the field and an even lower 13% from three.

“We knew coming in that we have enough offensive firepower. We knew that to start the game and get us going we needed defense and toughness,” Hill said. “The staff did a great job preaching to start on the defensive end, play hard and be physical.”

The odds were stacked high in the second game, as House of ‘Paign ran into the No. 1 seeded Carmen’s Crew, who took home the championship the year prior.

House of ‘Paign relied on its two top scorers again, Daum and Feliz, to pull off the upset of the tournament, winning the game 76-68. Daum poured in an efficient 23 points, going 8-10 on the field and a perfect 3-3 from three. Feliz added a nice stat line, putting up 15 points, eight rebounds and five assists.

Feliz led the team in scoring, rebounds and steals, going 17, 14 and four, respectively. Chicago native and DePaul alumni Billy Garrett Jr. added 16 points but even those two stat lines were not enough for the House of ‘Paign.

“That’s a good team. They’re smart guys and they won,” LaTulip said. “Some of those guys played on an Elite 8 team and others were probably favorites in some odds to win a national championship.”

House of ‘Paign’s effort was rewarded with multiple post-tournament accolades. They received the fifth spot in the final 2020 TBT power rankings, and the team’s two best players, Daum and Feliz, were both on the tournament’s All-Defensive team.

With the loss, House of ‘Paign ended a very productive run in their first year of the tournament. Although they fell short of their ultimate goal, they gave Illini fans something to root for after a promising Illini team’s March hopes were taken from them.