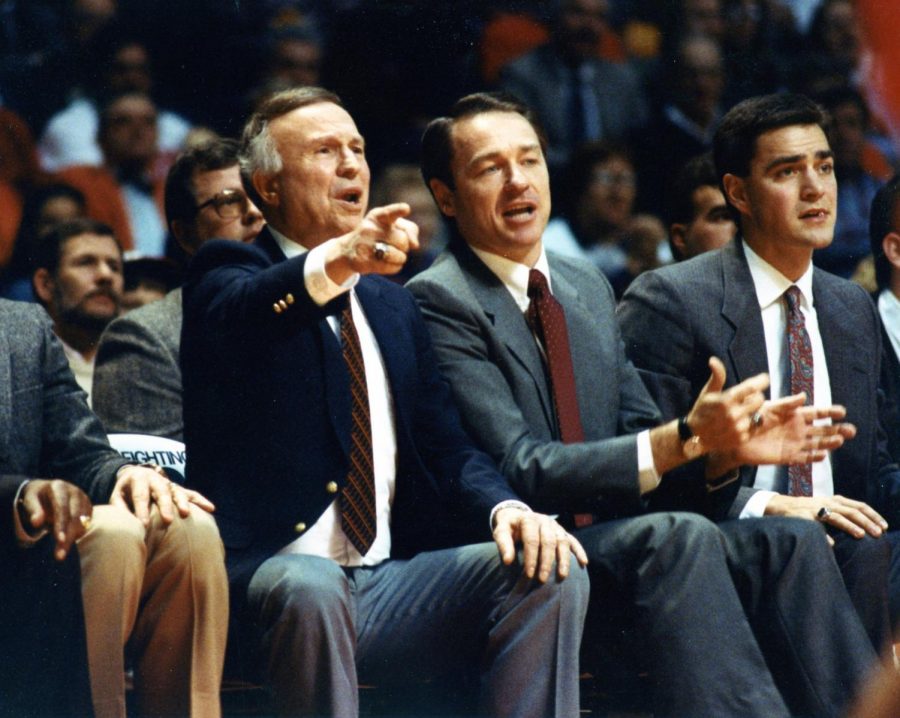 Illinois Head Basketball Coach Lou Henson gestures towards the court during a match.

On July 29, the college basketball world and the Illini community received the news they had lost a legend and friend. Lou Henson, the most winningest coach in Illinois men’s basketball history, passed away just days earlier.

“Our Orange and Blue hearts are heavy,” said Illinois athletic director Josh Whitman in a press release July 29. “We have lost an Illini icon. We have lost a role model, a friend, and a leader. We have lost our coach. Coach Henson may be gone, but the memories he provided us, and the legacy he created, will last forever. He was responsible for almost 800 wins in the record book and countless Fighting Illini moments frozen in time, but Coach Henson’s true measure will be felt in the lives he touched — the lives of his former players, people on this campus, and friends in our broader community.”

We are all better for whatever time we were privileged to spend with Coach Lou, whether it was five minutes or 50 years. He made everyone feel like a friend. I so enjoyed my time with Coach these last five years, and I will miss him. Our thoughts and prayers are with Mary, Lisa, Lori, Leigh-Anne and the entire Henson family. Their family will always be part of ours.”

Henson’s reputation at the highest level of college basketball was unmatched. His Illini earned a top-5 seed in the NCAA tournament seven straight years from 1984 through 1990. His most notable team was the 1988-1989 Flyin’ Illini.

Many Flyin’ Illini members took to social media within the early days of Henson’s passing to show appreciation for their former coach and lifelong friend.

“Too many words to fit into this tweet,” Gill said on Twitter. “But he’s the Greatest Coach that I’ve ever played for!  What a Man! Thank you, Lou Henson!”

“Hearing the news of my college coach Lou Henson passed away over the weekend! Lou taught us a ton of lessons that really kicked in as adults,” Bardo said on Twitter. “Truly underrated coach and a great man. Rest easy Coach!”

Deon Thomas, the all-time leading Illini scorer, talked with Bardo on Bardo’s Breakdown Facebook Live about how Henson changed the trajectory of his life.

“He changed my life,” said Thomas on the Facebook Live. “And not only my life but he changed the trajectory of so many in my family. … I grew up on west side of Chicago in a (bad) situation. Really (bad) situation. My mom was a crackhead. I was already into some stuff I shouldn’t have been doing. After all that, I was the first person in my family to go to college, let alone graduate. There’s three people who changed the trajectory of my life and my family’s future for generations. They saved my life. If it wasn’t for Coach Henson, I don’t know if I would be here today. That’s just truth.”

More of Henson’s career highlights can be found at www.dailyillini.com/sports/2020/08/04/honoring-henson-flyin-illini-tournament-appearances-top-coachs-career-highlights/