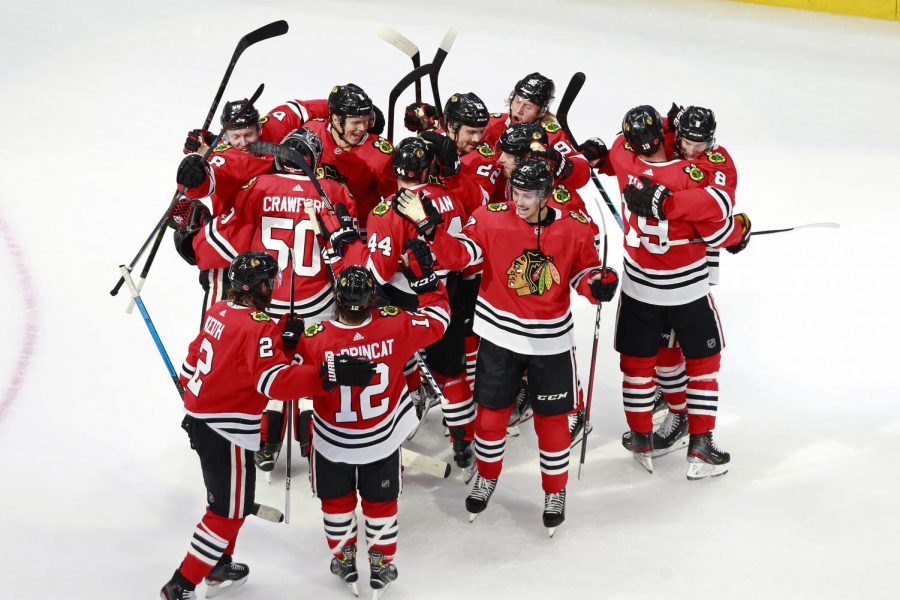 The Chicago Blackhawks celebrate a 3-2 victory against the Edmonton Oilers to win Game 4 and clinch the Western Conference Qualification Round series at Rogers Place in Edmonton, Alberta, on Aug. 7. After the cancellation of sports in March, the NHL season restarted and is now nearing the quarterfinals.

When sports across the board got canceled in March, fans went through something unimaginable: no games to watch for three months. With March Madness canceled, the major professional sports postponed and Big Ten football canceled this fall, fans have received a gut punch from the coronavirus.

However, after months of only having Netflix or NBA dunk highlights, three out of the four major professional sports are back, appearing they will be able to finish their season. Thankfully, due to some creative measures by league commissioners, we have the NHL, NBA and MLB to catch you up on.

In March, the NHL appeared to have a wide-open race for the Stanley Cup. That has since only gotten bigger. The NHL made a change to the playoffs, allowing 24 teams to make the postseason, instead of the usual 16. Teams like the Chicago Blackhawks, who finished dead last in their division, were given new life, and they took advantage.

Playing 5-seed Edmonton Oilers on their home ice, the Chicago Blackhawks stunned Wayne Gretzky’s former team in four games to reach the next round. Although the Hawks lost their next series against the Vegas Golden Knights, the bubble gave them the chance to prove they can play with anybody.

Right now, the NHL is nearing the quarterfinals. With teams like Boston and St. Louis still alive, it’s truly anyone’s guess on who will hoist the cup this season.

LeBron James and Giannis Antetokounmpo appeared to be on a mission in March. But COVID-19 restrictions halted their momentum and now they’re trying to regain their forms. The NBA, the first league to cancel sports, came up with the idea to have a bubble in Orlando, Florida, and so far it has been incredibly efficient.

With frequent testing and a bubble, the NBA received no positive tests, which allows players to relax and continue to play some entertaining ball.

The NBA so far has been crazy with underdog teams showing their skills. The Phoenix Suns, who were horrible in the regular season, went 8-0 during the seeding round but still missed out on the postseason due to Damian Lillard and the Portland Trail Blazers.

Lillard, who won the seeding round MVP, has been ridiculous, as he’s regularly scoring in the 40s each game. But while Lillard and his team have garnered a lot of attention, the title still runs through Los Angeles with both teams — Clippers and Lakers — looking like the favorites to win the Western Conference while Toronto, Milwaukee and Boston look good in the East.

Finally, the MLB is back, although it appeared unlikely. Unable to come to an agreement, players and owners were taking a chance on just canceling the season and losing fans. However, with a 60-game season and expanded playoffs, a season was made. But even that has been shaky.

Being the only league without a bubble for its teams, players were getting positive tests for coronavirus, which sometimes affected whole teams. The Miami Marlins had to take almost a week off because too many players got the virus. The same goes for the St. Louis Cardinals. With numerous cancellations, the MLB has 33 games to make up in a shortened season, which means seven-inning doubleheaders will have to be heavily implemented.

However, it’s not all bad news. Most teams have stayed safe and been playing regularly. The Chicago Cubs started off on fire, going 12-3 despite horrible relief pitching. The Chicago White Sox, who haven’t had a winning season since 2012, have been out-hitting teams in their 15-11 start. With an expanded playoff, it’s very possible Chicago has both of their teams in the playoffs for only the third time in 114 years.