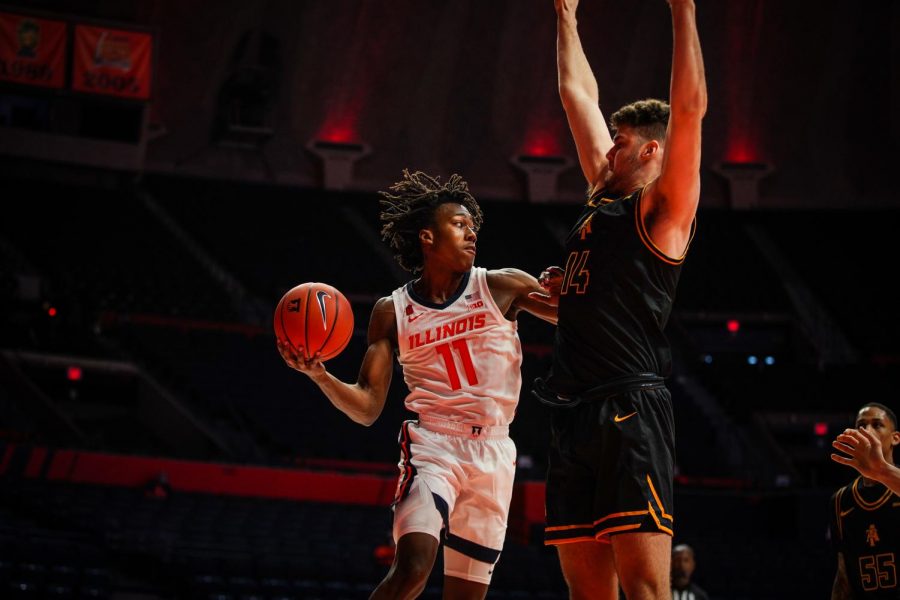 Ayo Dosunmu looks to pass the ball during the game against North Carolina A&T on Wednesday. The Illini won 122-60 at State Farm Center.

Three years after sharing the court together at Morgan Park High School in Chicago, junior Ayo Dosunmu and freshman Adam Miller were reunited at the State Farm Center on Saturday.

The two didn’t miss a beat as they combined for 56 points in Illinois’ 122-60 rout of North Carolina A&T.

After four empty possessions to start the game, Miller got the scoring started with a corner three off a Trent Frazier assist. A few possessions later, Miller drained a three from the same spot to give the Illini an 8-4 lead heading into the under 16-minute timeout.

While Illinois’ offense shined in the first half, it was the defense that got them going. Their ball pressure in the half-court strangled the Aggies to 18 straight missed shots and a scoring drought of over eight minutes. The Illini used those stops to get out on the fast break, scoring 14 points in transition in the first half and eight points off turnovers. The Illini would then end the half the same way they started it: a Miller three-pointer.

“Low and behold we got off to a really good start because of a freshman,” said head coach Brad Underwood of Miller. “I thought Adam was tremendous early, and I thought our defense in the first half was really solid. We contested shots at a very high level.”

The four-star freshman certainly lived up to his debut hype, draining shot after shot. He hit five of his six attempts from three in the first half. A transition lefty lay-up early in the second half broke Brandon Paul’s record for most points in a debut with 23. Miller finished 10-for-12 shooting and 28 points. Miller attributed some of the success to his teammates’ unselfishness.

“My teammates found me, they did a great job of finding me,” Miller said. “They did a good job of moving the ball. Everybody pitching it to the next guy, passing up good shots for great shots and that’s what happened.”

Miller wasn’t the only Illinois player who found his three-point stroke. Dosunmu, who shot 29.6% from beyond the arc last season, hit five of his eight shots from deep and finished with a career-high 28 points. Last season, Illinois’ season-high for threes in a game was 11, and Wednesday, Underwood’s squad broke that easily, hitting 17 threes and setting a program record. They also almost broke the program record for points in a game at 127 but fell five short.

The Aggies got off to an 8-6 start to the second half, showing some signs of life, but Dosunmu would have none of it, countering with a personal 10-0 run. Miller would add on two layups of his own, as would fellow freshman Andre Curbelo, pushing the lead to 81-27. The Illini would not look back, cruising to the 62-point victory.

Aside from the guards, Illinois also got solid contributions in the front-court from sophomore Kofi Cockburn and junior Jacob Grandison. Cockburn used his sheer size to finish with an 18-point, 10-rebound double-double. In his Illini debut, Grandison had 10 points and eight rebounds while making both of his attempts from deep. The group is happy with their performance but knows there is more work to be done.

“We have to keep building off this,” Dosunmu said. “It’s day one. We’re glad to get the win and we’re glad with the performance we had, but we still made little mistakes.”

Illinois will look to start 2-0 on Thursday as they take on Chicago State. Tip-off is scheduled for 11 a.m. and the game can be watched on the Big Ten Network.