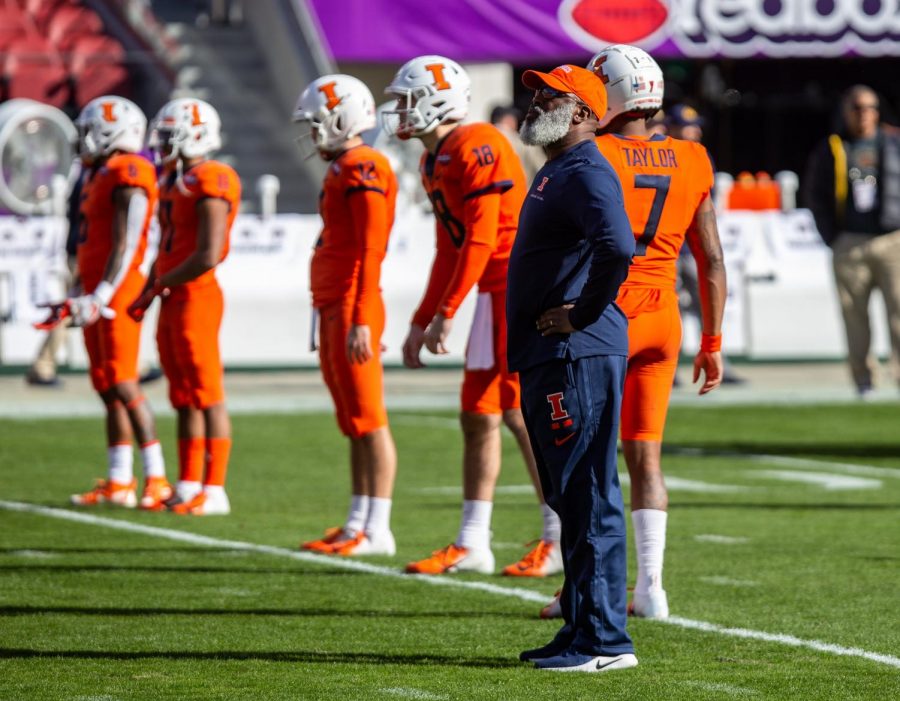 Lovie Smith stands near the Illini during warmups in the Redbox Bowl on Dec. 30. Smith has been fired as Illinois’ head coach, leaving uncertainty for the future.

This year has not been the rollercoaster type of season that Illinois football saw in 2019. The team started poorly after being affected by COVID-19, won a couple of games and followed it up with two disappointing losses in games they hoped to at least be competitive in. The Illini have one more chance to prove themselves in champions week, which will be against Penn State, but where does this team really stand heading into their final game of the year and looking ahead to 2021?

It’s safe to say the coronavirus definitely affected the Illini this season and most likely their overall record, too. After a poor performance in week one against a talented Wisconsin team, around a dozen players were sidelined for at least two weeks due to infection or contact tracing. Illinois lost to Purdue by a touchdown at home and Minnesota at home the next week, 41-14.

As I’m typing this, a couple of paragraphs away from suggesting a coaching change after five mediocre seasons, Lovie Smith is officially out as head coach. Before I get into what this means, let’s recap how the season ended for the Illini.

After an abysmal home performance against Minnesota, Illinois returned all but two players — senior quarterback Brandon Peters being the more notable of the two — to play at Rutgers. Redshirt freshman Isaiah Williams started at quarterback, and the Illini ran their way to a victory, 23-20. The following week, with Peters at quarterback and the team as close to full strength as it had been all year, Illinois pummeled Nebraska in Lincoln, 41-23.

Those two games showed a lot of promise. Lovie and the staff went into this season expecting at least a .500 record, and they were hit with COVID-19 and saw poor results early, but these two games gave fans a lot of promise for the final three games. A home game against Ohio State was canceled, a game that most likely would have been a blowout loss, and it was on to Iowa at home.

Illinois went up 14-0 early against Iowa and fans were going crazy. This finally looked like the team the Illini had expected to be all season long. Illinois was on a six-game losing streak against the Hawkeyes and was finally looking to break that streak. That didn’t happen.

So here we are. Illinois is coming off a two-game losing streak to end the regular season, which most likely would have been three games if it weren’t for the Ohio State cancellation. Lovie has just been fired, there isn’t a great recruiting class coming in and it is unclear which seniors will come back for another year and which won’t, other than senior offensive lineman Alex Palczewski, who posted on Twitter last week hinting that he’s coming back. Either way, the program is in a very tough spot.

Let’s start with Lovie. I have no question in my mind parting ways with Smith is the best thing for this program. After five years, Smith should have more to show than one bowl game appearance and a 17-39 overall record. Last year’s bowl season was fun, but it seems to have been a fluke.

Sure, it is a fair argument that without COVID-19 affecting the team, this season would have been different. In fact, without any schedule changes, it is very reasonable to think Lovie and the Illini would have started 5-0. Three easy non-conference games would have resulted in three wins, and then Illinois had Rutgers and Nebraska to start the season. Throw Purdue in the mix a few games later with a healthy lineup, and there are six wins right there. Bowl game.

But to some extent, it doesn’t matter. Lovie has a 10-33 Big Ten record since joining the team. To be successful at any school, you have to be able to win in your conference, and Lovie just hasn’t done that. The subpar record, mixed with his inability to recruit in-state guys, proves it was time to move on from Lovie. It’ll be interesting to see who athletic director Josh Whitman has in mind for a new head coach.

Whether Illinois wins this final game or not, let’s be honest: it probably has no effect on who will stay and what happens with the future of the program. This game doesn’t matter other than maybe seeing how interim head coach Rod Smith handles the offense.

Illinois has a strong, senior-led offensive line and other key seniors spread across the team. If the majority of those guys stay, 2021 could actually be somewhat okay. And it’s not just seniors who could leave for good, but recruits and underclassmen, too.

Isaiah Williams is also a key guy to look at. Williams led Illinois to one of its two wins in his only start of the year and led touchdown drives late in the game against Iowa and Northwestern. He can run, has good field vision and has also proven he can pass a little bit. Keep him, and the Illini a solid quarterback to lead them for at least a couple of years.

Hiring a good coach is going to be vital to success in 2021. These seniors are pretty good, and retaining them could make for a more exciting season next year. Whether Illinois ends up playing Penn State, this last game doesn’t really matter. The Illini are making the necessary changes to move the program in the right direction, and that started Sunday with Lovie Smith being “relieved of his duties.”