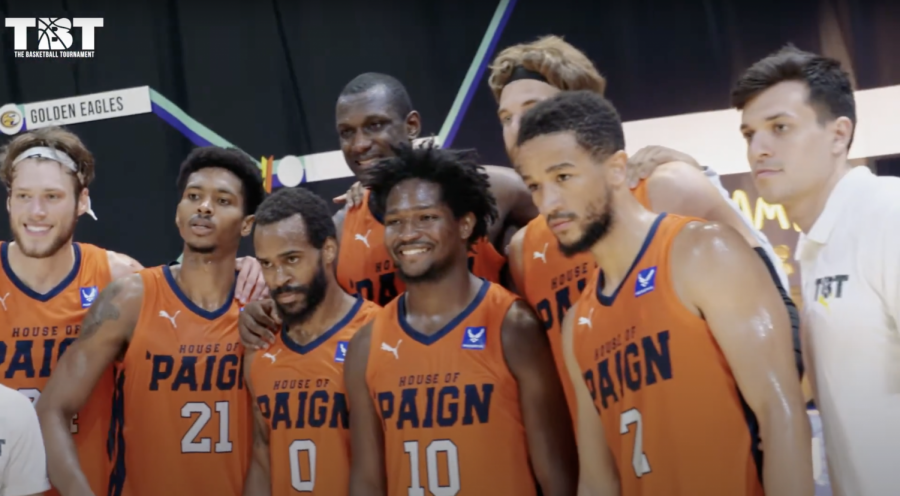 Last years The Basketball Tournament team “House of ‘Paign” poses for a photo. Illinois recently finalized their team for the tournament and all ten players receive an in-depth analyzation.

In 2020, with the world shut down almost entirely, one sporting event remained to keep sports fans entertained during COVID-19 lockdowns: The Basketball Tournament, a $1 million, winner-take-all tournament that features 64 teams composed of alumni from colleges across the nation.

House of ‘Paign made its first appearance in the 2020 tournament, competing as a 16-seed. Though unknown to most, the Illinois alumni team, coached by former Illini Mike LaTulip, took down 17-seed War Tampa before sending a message by defeating reigning champion and No. 1 seed Carmen’s Crew in the second round.

Though the team ultimately lost to 8-seeded Red Scare in the quarterfinals, the impressive run in its debut season earned House of ‘Paign — alongside with Bradley’s alumni team, Always A Brave — the opportunity to host a regional for the 2021 tournament.

Though the team features several returners, such as beloved fan favorite and honorary Illini Mike Daum and recent graduate Andrés Feliz, House of ‘Paign also welcomes a few newcomers, with the most notable addition being former Illini star Brandon Paul.

With the Illinois Regional quickly approaching, the roster formalized and the team’s opening-round matchup with Jackson TN UnderDawgs, which had to withdraw from last year’s tournament following positive COVID-19 tests, announced, let’s go through all 10 players on the second-seeded House of ‘Paign’s 2021 team.

Feliz competed at Illinois from 2018 to 2020 after transferring to Champaign from Northwest Florida State College, a two-year junior college in Niceville, Florida. The Dominican Republic native averaged 9.6 points, 3.9 rebounds and 2.6 assists during his time with the Illini while playing in 64 games and making 19 starts.

After graduating in 2020, Feliz competed with House of ‘Paign in its first The Basketball Tournament appearance last summer, scoring 20 points and notching seven rebounds in the team’s 23-point opening-round victory over War Tampa while also adding 15 points in the upset win over Carmen’s Crew in the second round.

Despite House of ‘Paign being labeled as an Illinois alumni team, Daum is one of two players — see Northwestern graduate Juice Thompson later — who did not attend school in Champaign-Urbana; the six-foot-nine forward played for South Dakota State, where he averaged a whopping 22.4 points and nine rebounds per game. After starting three games as a freshman, the Nebraska native started 103 consecutive games, a streak that lasted throughout his sophomore, junior and senior seasons, during which he earned the Summit League Player of the Year award each of those years. He also is one of just 10 Division-I players to finish with over 3,000 career points.

Like Feliz, Daum also participated in the team’s debut tournament and quickly became a fan favorite. The former Jackrabbit averaged 18.7 points across House of ‘Paign’s three games last year, including a game-high 23 points in the team’s upset win over Carmen’s Crew. Daum now plays for Monbus Obradoiro in Spain.

A native of Champaign, Rice played two seasons at Illinois from 2013 to 2015 after transferring from Drake. In his two years as an Illini, Rice averaged 16.1 points, 6.2 rebounds and 1.6 assists, leading Illinois in scoring in both seasons. The six-foot-four guard also earned honorable mention All-Big Ten accolades in his two years representing his hometown school.

After leaving Champaign, Rice has made stops in several countries overseas, getting opportunities to play in Italy, France, Mexico, Russia, Israel and, most recently, Japan. Last season, Rice averaged 20 points, 5.2 rebounds and 2.7 assists for Kyoto Hannaryz.

McCamey played for Illinois from 2007 to 2011 after coming to the Illini as a four-star recruit out of Bellwood, Illinois. In his four years in Champaign, the six-foot-three guard averaged 12.4 points, 3.1 rebounds and 5.3 assists while starting 115 of the 139 games he participated in. McCamey also earned All-Big Ten First-Team honors following his junior senior season, and at the time of his departure, he finished his Illini career tied for the program record for most games played, the second most career assists (733) and the seventh most points (1,718).

Like Rice, McCamey has been all over the map since going pro, playing in Turkey, Israel, the United States, Australia, Japan and Italy. Most recently, the former Illini competed with the Austin Spurs in the NBA G League in 2019.

Despite donning the orange and blue of House of ‘Paign for the first time, McCamey is no newcomer to this competition: He competed with Carmen’s Crew for two years, including in 2019 when it won the tournament and in 2020 when it fell to the people he now calls his teammates.

Egwu competed in Champaign from 2011 to 2015, averaging 5.5 points, 4.6 rebounds and 1.5 blocks across 136 games. The Nigeria native was a wall on the defensive end of the court, eventually earning him Big Ten All-Defensive Team honors following his senior season in 2015.

After departing from Champaign and going undrafted in 2015, Egwu played for the Orlando Magic in the NBA Summer League before heading to the NBA Developmental League. Since then, the six-foot-eleven center has played in Australia, New Zealand and Malaysia, though he most recently played for Earth Friends Tokyo Z in Japan.

Egwu competed for House of ‘Paign in 2020, notching two points and seven rebounds in the team’s win over War Tampa.

Black attended Illinois from 2014 to 2018, averaging nine points, 5.2 rebounds and 0.5 assists in his four seasons in Champaign. In his senior season, the Memphis native finished with a career-best 15.3 points per game, earning honorable mention All-Big Ten honors.

After not being selected in the 2018 NBA Draft, Black signed for an Israeli team, though he headed back to the United States after not making any appearances in Israel and was picked in the NBA G League Draft. Black was waived just two weeks later, and he has since played in Argentina, Brazil and Mexico, where he now plays for Abejas de León.

Black also participated with House of ‘Paign at TBT in 2020, scoring two points in the team’s first-round victory.

Nichols, alongside Feliz, is the most recent Illinois graduate to compete for House of ‘Paign after he played in Champaign from 2016 to 2020. The Cleveland native averaged 6.1 points, 2.9 rebounds and 0.7 assists across his four years as an Illini.

After heading overseas following his graduation from Illinois in 2020, Nichols found a home with the B. Braun Sheffield Sharks in the British Basketball League, where he averaged 10.3 points, 2.9 rebounds and 1.8 assists per game. The six-foot-six forward will be competing in his first TBT competition with House of ‘Paign.

Tate played at Illinois from 2013 to 2017 after arriving as a three-star recruit from Chicago’s Simeon Career Academy, where he played alongside current NBA players Jabari Parker and Kendrick Nunn. The Chicago native averaged 2.4 points, 1.2 rebounds and 2.5 assists in his 121 appearances — and 35 starts — across four years in Champaign.

Since leaving the Illini, Tate has competed in Canada, where he was named the National Basketball League of Canada’s Rookie of the Year following the 2017-2018 season. The six-foot-three guard has since played in Finland, Latvia, Canada and, most recently, Austria, where he won the league championship with Swans Gmunden.

Like Daum, Thompson did not attend Illinois, instead playing college hoops for in-state rival Northwestern from 2007 to 2011. The former Wildcat made 129 starts while averaging 13.1 points, 2.0 rebounds and 4.1 assists across his four years in Evanston. He ranks first in program history in minutes played (4,633), first in assists (528), second in 3-point field goals (276) and third in points (1,689).

Since graduating in 2011, Thompson has spent time playing in Germany, France, Turkey and Kazakhstan, where he currently plays for BC Astana in VTB United League in Russia. The five-foot-ten guard played professionally for 10 seasons.

Last, and most certainly not least, is Paul, who played at Illinois from 2009 to 2013 and averaged 12.0 points, 3.8 rebounds and 2.2 assists across his four years in Champaign. The Gurnee native sits ninth in the Illinois record books in scoring with 1,654 career points, and he earned All-Big Ten Third-Team honors following his junior and senior seasons. Paul also had the game-winning, buzzer-beating assist in Illinois’ historic upset of No. 1 Indiana in 2013 and beat the buzzer to defeat Minnesota in the opening round of the 2013 Big Ten tournament.

After missing out on hearing his name called in the 2013 NBA Draft, Paul played for the Minnesota Timberwolves in the NBA Summer League before heading to Russia soon after. During his professional career, Paul had a brief stint in the NBA, playing 64 games for the San Antonio Spurs during the 2017-2018 season while averaging nine minutes, 2.3 points, 1.1 rebounds, 0.6 assists and 0.4 steals while also getting game time in one playoff game.

The six-foot-five guard has played in Russia, the United States, Spain, Turkey, China, Greece and Australia, where he now plays for the Adelaide 36ers.