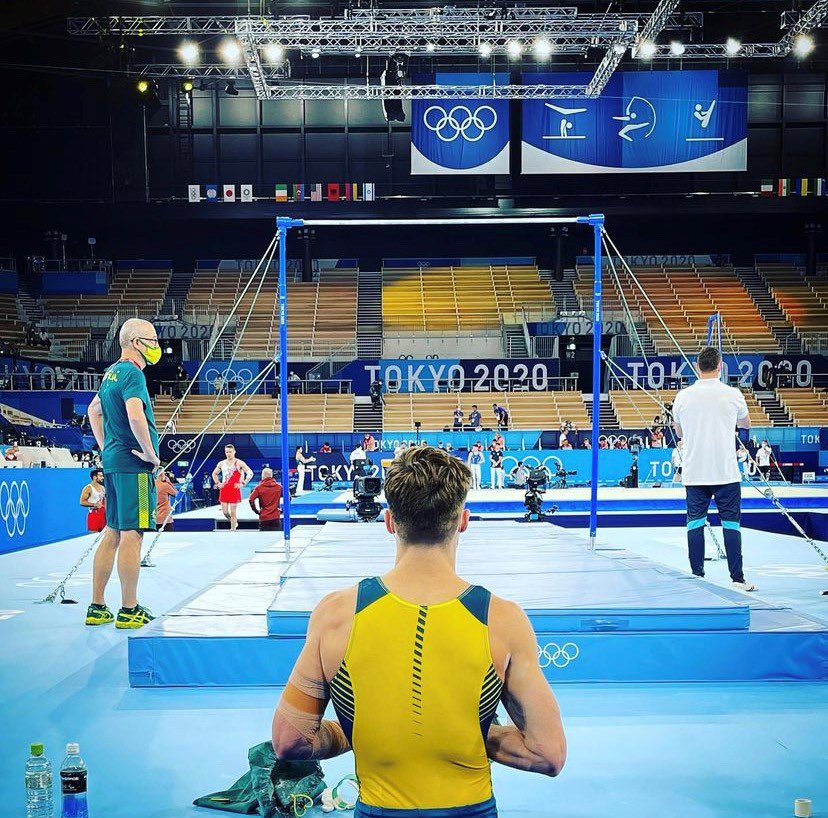 Tyson Bull prepares to perform on horizontal bar at the Tokyo Olympics. Bull advanced to the finals of the event.

Former Illini gymnast Tyson Bull made his Olympic debut on Saturday when he competed in the qualifying phase of the men’s artistic gymnastics competition. As the only male artistic gymnast to represent Australia in Tokyo, Bull competed as an individual on parallel bars and horizontal bar, hoping to place in the top eight on those apparatuses and secure a spot in their respective finals.

But parallel bars isn’t Bull’s best apparatus; horizontal bar is. He scored 14.433 on that apparatus, tying for sixth place and securing a spot in the horizontal bar final. Bull made history by doing so, becoming the first male artistic gymnast from Australia to ever qualify for an apparatus final at the Olympics.

Bull, the 26th gymnast to compete on horizontal bar, vaulted himself into third place with his performance, although he was displaced in the standings by three gymnasts before the second rotation was over. Bull fell into a tie for fifth place, but of the next 40 gymnasts to compete on horizontal bar, only one was able to outscore him, preserving his place in the top eight.

Japan’s Daiki Hashimoto placed first in the qualification phase on horizontal bar with a score of 15.033. He was followed in order by Kazakhstan’s Milad Karimi (14.766), Croatia’s Tin Srbić (14.633), the United States’ Brody Malone (14.533), and the Russian Olympic Committee’s Nikita Nagornyy (14.466). Bull tied Japan’s Takeru Kitazono with 14.433 for sixth place, with the Netherlands’ Bart Deurloo (14.400) filling out the remainder of the qualified horizontal bar gymnasts.

Bull took to Instagram to celebrate his qualification, saying that he was “speechless.” Australian athletes from other sports and Bull’s Illini teammates, including fellow Olympian Alex Diab, expressed their congratulations and excitement in the comments section and on their Instagram stories. Australian gymnastics fans were just as excited, taking to Twitter to celebrate Bull’s achievement.

The horizontal bar final will take place on Aug. 3.