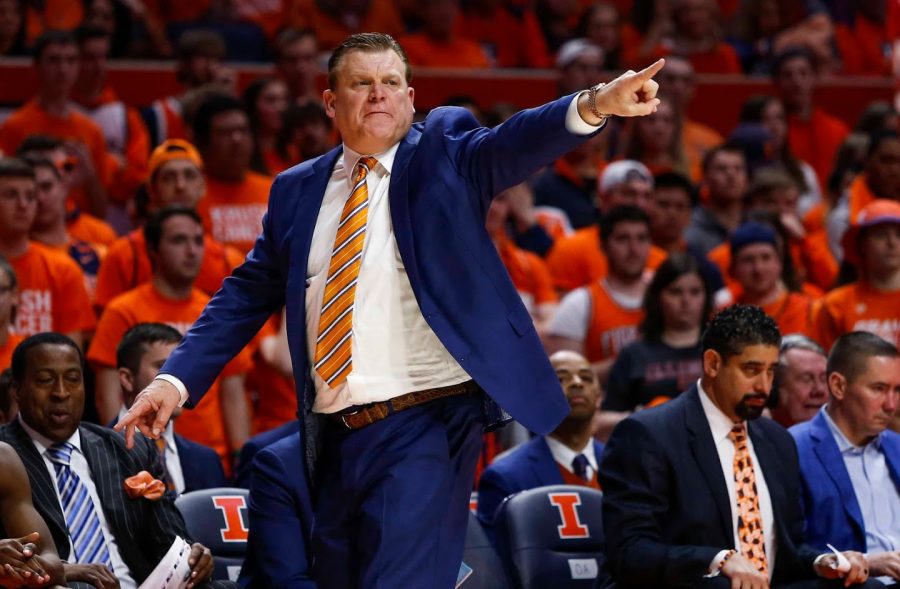 Illinois Head Coach Brad Underwood points towards the court during the match against Nebraska at State Farm Center in Champaign, Illinois on Monday, Feb. 24.

The Oklahoma State men’s basketball program was hit with a slew of punishments on Friday, which included a ban from 2021 postseason play, for NCAA violations that took place during current Illini coach Brad Underwood’s tenure.

The violations are specifically tied to the accepting of bribes to steer players toward representation from former Cowboy assistant coach Lamont Evans, who was hired by Underwood, taking place sometime between 2016 and 2017.

Underwood left Stillwater to accept the job at Illinois following a loss to Michigan in the 2017 NCAA Tournament, and Evans, upon being charged by the FBI as part of a sting operation to catch major college basketball coaches committing felonies in recruiting, was fired in 2017.

Evans would eventually be sentenced to three months in prison last June.

The player likely in question for Oklahoma State, Jeffrey Carroll, was suspended for three games in 2017 as a result of his involvement in the bribery scandal.

The entire sting operation that resulted in Evans’ arrest, along with multiple other assistant coaches around college basketball, was detailed in an HBO documentary that aired on March 31 of this year, titled “The Scheme.”

The documentary recounts the life story of Christian Dawkins, a savvy opportunist from a basketball-playing family who realized his lack of physical gifts would prevent him from having a serious career early on and quickly pivoted to a different money-making path within the basketball landscape.

Dawkins began selling exclusive recruiting rankings of high school players in the state of Michigan to college head coaches around the country, and eventually used his relationships working on the AAU grassroots basketball circuit to get a job under basketball agent Andy Miller, who played a pivotal role in getting caught in the FBI’s bribery case.

Eventually, Dawkins was identified as someone with enough relationships to take down top college basketball coaches, or so the FBI thought, and he was approached by agents pretending to be rich businessmen looking to get into the business of paying recruits.

The documentary can be viewed on HBONOW, but despite the massive attention it generated, many of the top programs implicated in the film, including some (Arizona’s Sean Miller and LSU’s Will Wade) that were even caught on recorded calls discussing payment, have yet to face serious punishment. This likely stems from Dawkins’ appeal of his year-long sentence, and the film’s ability to show that the FBI’s plan was quite poorly thought out and executed, as there are several issues within the case, including Dawkins’ persistent unwillingness to bribe assistant coaches, and clear misconduct on behalf of the agents involved with the case. What makes the case’s poor execution extraordinary is that it was handled by the Southern District Court of New York, a court that is known for always getting its convictions and often involving itself with high-profile, national cases.

Since Underwood and Evans’ departure, the Cowboy program has rebuilt and looked primed for a breakout season in 2020-2021, with the No.1 ranked freshman in the country, Cade Cunningham, joining the team (though some may question the legitimacy of his choice given that his brother, with no coaching experience, was hired as an assistant coach at Oklahoma State prior to his commitment). Now Cunningham will likely reevaluate his future and may follow the path of many other recruits ranked similarly to him in the 2020 class and play professionally for one season rather than attend college.

It should be noted that allegations of any sort specifically tied to Evans have never been brought against Underwood, so there is no reason to think the current Illini coach is in danger, but that hasn’t stopped the Oklahoma State faithful from voicing their displeasure with punishment stemming from his time in charge.

Before he split, Brad Underwood was viewed as a godsend at Oklahoma State. Now the collateral damage he left behind looks more like a napalm drop on the program. Regardless of who did what, he hired Lamont Evans.

Interestingly enough, both of Underwood’s former stops (Oklahoma State and Stephen F. Austin) face postseason bans for 2021, though again, Underwood, and more importantly the Illini program, are likely not in any trouble.

Though Illinois likely won’t take any fall for these mistakes, one failure of duty that the NCAA has used to punish multiple college basketball coaches over the years has been a lack of institutional control, notably Rick Pitino at Louisville, and the fact that serious violations took place, whether knowingly or not, during Underwood’s time in Stillwater will certainly cause him to be seen as guilty in that area in the court of public opinion.