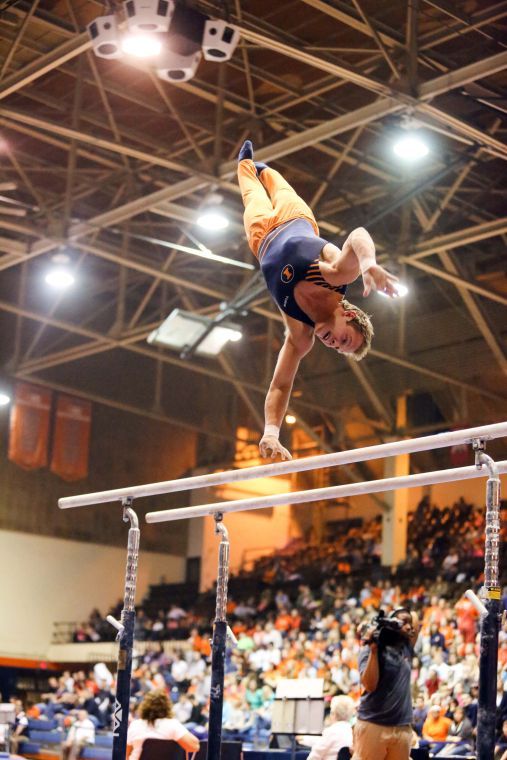 Illinois' Cameron Rogers preforms his parallel bars routine during the meet against UIC at Huff Hall, on Saturday, Mar. 9.

Maestas, who suffered a season-ending tricep injury last year, was rested because of his intense schedule in recent weeks. Because of the Winter Cup meet, daily practices preparing for the end of the season and a recent illness, head coach Justin Spring felt it would be best for both Maestas and the team, if Maestas sat out.

“It was tough because he is an amazing competitor and probably adds eight points to our team score, but it was the right thing to do,” Spring said.

The seniors, who were feeling nostalgic heading into their final meet at Huff Hall, took it upon themselves to lead the team.

“It’s sad knowing that this is the last time that I will be doing gymnastics at Huff Hall ever, so it was bittersweet,” senior Cameron Rogers said.

The Illini struggled early on floor, landing none of their five routines and putting themselves in a quick 66.85-67.80 hole.

“Floor was abysmal, it was probably the worst team event I have seen in a long time,” Spring said. “Sometimes you let the bad energy get to you.”

Even with the disappointing effort, sophomore Fred Hartville won the event for Illinois with a 14.25.

The next event was pommel horse, which has been the strongest event for the Illini all season, and Saturday was no different.

After watching nothing go right in the first event, sophomore Logan Bradley, who was first up for the team, threw down a top-notch routine regaining the momentum for the Illini.

The next four members of the “Pommel Crew,” as they like to call themselves, hit their routines, winning the event comfortably 72.70-66.65.

Senior Cole Smith won the event for the Illini with a 14.900, beating out fellow senior Chad Mason by one-tenth of a point.

“Cole Smith ending his last home competition with a title win is very awesome, very well deserved, one of the hardest workers I have ever seen,” Spring said.

The Illini never looked back, winning the next four events individually and as a team.

Rogers won parallel bars with a score of 14.90 breaking his season best. He added a 14.700 on rings, which tied his season high and was good enough for second place.

Freshman Chandler Eggleston, despite his uncharacteristic fall on the floor, rebounded nicely, winning on vault and setting another personal record with a 15.400. He also added a second-place finish on horizontal bar with a 14.700 and a fourth-place finish on parallel bars with 13.600.

Junior Jordan Valdez rounded out the day for the Illini by winning the high bar title with a 14.850.

Once the meet was over, it was difficult for the seniors to fathom the idea that they would never compete at home again.

“We were in shock basically, being a senior and not wanting to finish yet,” Smith said.

This year’s seniors were also Spring’s first recruiting class which made it harder for Spring to say goodbye to them.

“They will be greatly missed, they were awesome, good people, good athletes,” Spring said.