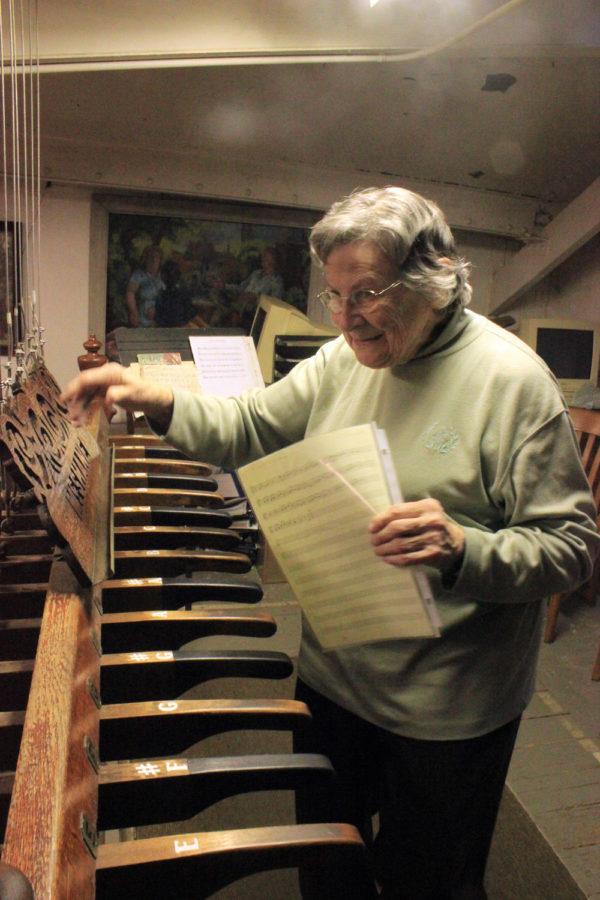 Chimesmaster Sue Woods practices on the chimes in Altgeld Hall.

The sounds of Altgeld Hall’s bells are an all too familiar sound across the Main Quad. On Monday, Chancellor Wise sent out a video reminding campus that those spirited tunes are not automated, but the workings of the University’s chimes players.

Tucked inside a cozy room at the top of Altgeld Hall Tower, the University of Illinois Chime sounds out a variety of melodies. While there is an automated system that plays the bells at the quarter hour, 10 chimes players operate the bells from 12:50 to 1 p.m. Monday through Friday, all working under the chimesmaster, Sue Woods.

According to Woods, the Altgeld Hall Tower was designed to hold the 15 bells that make up the chime. The chime was dedicated and established in 1920 and has been renovated in 1957 and 1987. The bells were a gift to the University from the classes of 1914 through 1921 and the U.S. School of Military Aeronautics.

Woods said that the eight classes could only raise money for 13 bells, but 15 were needed to play “Illinois Loyalty,” so the U.S. School of Military Aeronautics donated the money needed for the last two bells, and in return, the second largest bells are dedicated to them with its engraved name engraved. The third largest is dedicated to the Classes of 1914 to 1921, which made the effort to make the bells a possibility, and the largest one was dedicated to the President of the University at the time, Edmunds J. James.

“What we always hear from alumni is that the top three things they remember from their time at the University are the Quad, the Alma Matter and the chimes,” Woods said. “Whether or not they know someone is playing them, they always mention that the sound of the bells is something they don’t forget.”

Cody Jones, senior in LAS, has been playing the bells since October and said his favorite part about the job is the anonymity.

“The fact that nobody really knows that someone is playing is cool, or even if they do know that its somebody playing, they don’t know who it is,” he said. “So if you make a mistake, no one will know, and you’re not as embarrassed as you would be if you were performing in front of an audience.”

The chimes are a carillon, which is defined as bells that are played by striking long rod-like keys called batons or levers. These levers are attached to long airplane wires that are attached to the bells 65 feet above the room with the carillon.

Chimes players come in throughout the week to practice on the practice keyboard before they take on a live performance.

The doors to the tower are open from 12:30 to 1 p.m. for tours, and anyone with a general interest can come up and get involved.

Joanna Surowka, freshman in LAS, began chiming in the beginning of the school year.

“My first week of school I came to class early and saw the door open that said, ‘Chime Tower,’ and thought, ‘Wow this is cool.’ So I came up here and kept coming a bunch of times after that, and then Sue asked if I wanted to play chimes for her,” she said. “I was like, ‘Wow, that would be so amazing; I’ve always wanted to do that,’ and I ended up becoming a chimes player.”

Surowka, who said she has always had music in her life, loves playing the variety of songs up in the tower.

Woods said the only mandatory song they have to play is “Hail to the Orange,” but all the chimes players have creative license to play what they wish. Woods herself, with a Welsh background, said when she started chiming she frequently played a Welsh tune called “The Ash Grove.”

Jones’ favorite thing to play is a scale called “Change Ringing,” but he has also played pieces from the Zelda video game series and the “Futurama” theme song. Woods said that the Harry Potter theme song, “Hedwig’s Theme,” is a popular song among students on campus.

Woods said that people playing the chimes is the whole purpose of the carillon.

“They can do all kinds of things. It’s like piano; you can arrange things in all kinds of manners, there are all kinds of possibilities in solo work, like a piano, that the audience can enjoy,” she said. “It’s a fun thing to see what you can put together.”

Surowka said she thinks the chimes are something special to campus.

“Whenever I’m walking through the Quad and hear the bell tower, it puts me in a really good mood,” she said. “You can be walking along stressing out about a test or finals, but hearing little songs playing on the bell tower really cheers me up.”

Jones said he hopes that the chimes will never go automatic.

“I think if they were automated it would take some of the charm out of it,” he said. “It’s just nice knowing that people play it, that it’s not just done by a computer.”

Saher can be reached at [email protected].