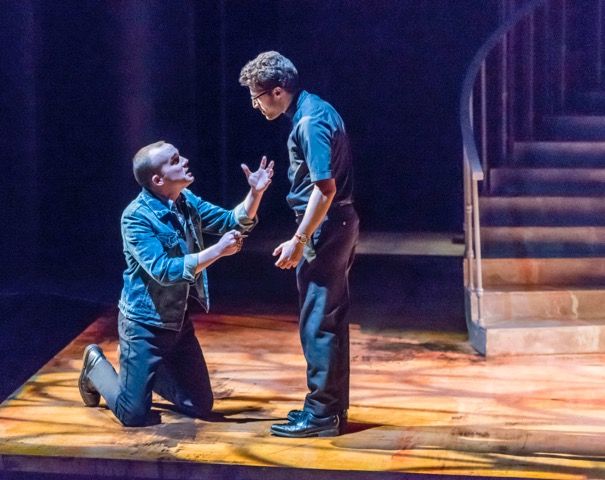 Actors practice in rehearsal of “‘Tis a Pity She’s A Whore” in the Colwell Playhouse at the Krannert Center in Urbana on Monday. A performance is set for Friday at 7:30 p.m.

For students not enticed by the upcoming drinking festivities, there is a variety of events to take part in that do not revolve around green and alcohol.

The Illini Union Board will be screening “Life Itself” — the 2014 biographical documentary film about Roger Ebert, Pulitzer Prize-winning film critic and University alumnus — as part of its Friday Night Films series. Free popcorn will be offered to the first 100 students, so get over to the Pine Lounge early.

7:30 p.m. at the the Krannert Center for the Performing Arts’ Foellinger Great Hall

Directed by Stephen Alltop and featuring Jeff Midkiff on mandolin, this Champaign-Urbana Symphony Orchestra performances is dedicated to the farmers of the American heartland. The show will include performances of Aaron Copland’s “The Tender Land Suite,” Jeff Midkiff’s “From the Blue Ridge” and Antonín Dvo?ák’s Symphony No. 9 in E minor, “From the New World.”

As part of the Hatch Art Festival’s two-week-long events, this lecture-demo led by Colten Jackson, a machine and design assistant at the C-U Community FabLab, will show how computer junk can be turned into electronic instruments by children and adults alike.

The Nile Project: Music of the Nile

The performance, led by Egyptian ethnomusicologist Mina Girgis and Ethiopian-American singer Meklit Hadero, highlights the musical community of the Nile. The songs will span across the region’s traditions, all sung in 11 different languages by six vocalists.

For nearly 400 years, John Ford’s tale of treachery, revenge, and incest has been viewed as one of the most shocking plays in world theatre. Despite its age, its themes mark it as surprisingly modern. Religion, sexual politics, morality and justice are confronted throughout this drama. Please note that this production contains strong adult content and is for mature audiences only.

Mission Improvable will bring a free performance on Friday night with an opening set by Odd Request Improv. Popcorn will be served while supplies last, and door prizes will be offered, as well.

The annual Heartland Music Festival will return this weekend, with Friday’s event starring Manic Focus with Kyral x Banko and Artifakts. Doors open at 8 p.m., and the show is 18 years and older.