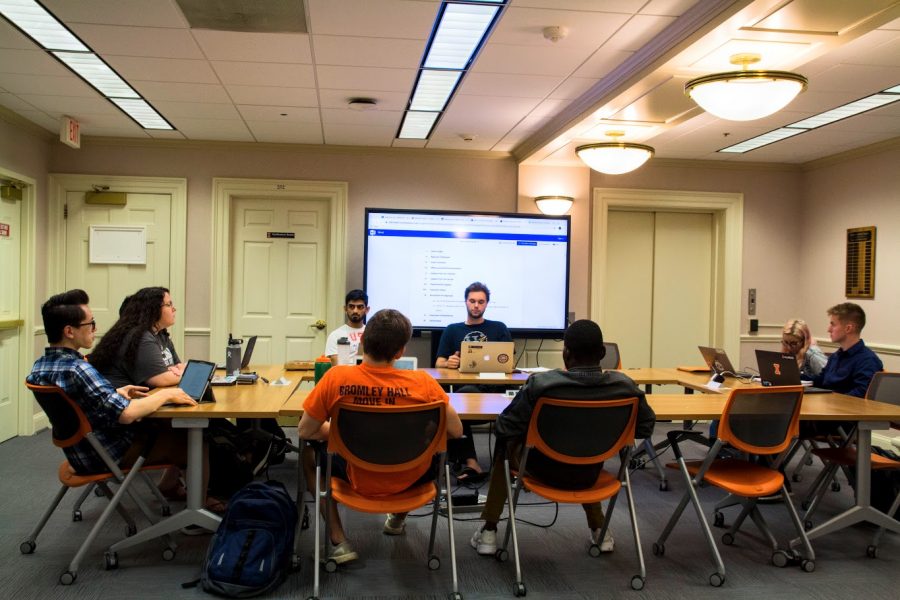 The Illini Student Government meets on the second floor of the Illini Union on Sunday.

In response to increasing activism and mounting concerns over college expenses, campus divisiveness and student safety, Illinois Student Government is establishing plans to create a more secure and satisfying University experience for all students.

Susan Zhou, junior in LAS and speaker tempore of the student senate, said the student government acts as a powerful mediator between concerned or frustrated students and members of University administration who can enact official change.

“Being the official voice means that we have direct lines to many within University administration who are obligated to listen to what we have to say and recommend,” Zhou said.

Student body president and junior in Media, Connor Josellis, said he intends to establish proposals based on his campaign platform of environmental sustainability, campus and textbook affordability, student safety and student advocacy.

“Textbook affordability is something I’m really interested in,” Josellis said. “It’s just an egregious cost on students. Something I’ll be looking into this year is pushing open-source textbooks, which are basically online, free and just as credible as the ones you’d get at the bookstore.”

In the wake of an incident at Allen Hall last week where a noose was discovered in a dormitory elevator, a symbol largely perceived as a racist threat referencing lynchings, Josellis said ISG took steps to make the voices of students who were directly affected by the event heard.

“Most recently the vice chancellor, the new dean of students and a few others from the vice chancellor’s office came to our meeting to listen to black students across campus about the noose incident that happened,” Josellis said. “It’s making sure that we have detailed plans that we can present them and they can follow through on.”

Payal Patel, sophomore in Business and ISG’s chair of public relations, said in an email the organization and its members plan to host listening sessions with different University groups and communities to gauge specific needs and concerns.

“The question is how do you reach out to the people you serve,” Josellis said. “My plan for that this year is listening sessions at different cultural houses, RSOs and Greek life to ask what we can do to complete plans and make their lives better.”

Josellis said he also wants the trend of increased young voter turnout and activism to continue on campus with public campaigns to register and get out to vote in the upcoming primaries.

“In 2018, we had one of the highest turnouts in decades, and I like to think that was partly due to the student government’s efforts,” Josellis said. “We want to bring some candidates to campus, get students excited and push them to vote.”

Josellis said in the end, the true power to push for change lies with the University’s student body.

“With our diverse, 44,000-student body, we can make noise, and the University knows that,” Josellis said. “(ISG) has a microphone and a platform that we can use to speak out on behalf of all the students, we have connections with administration and our main role is to shine a spotlight on students fighting for change so the administration will listen.”