I wish I knew these things before joining a sorority 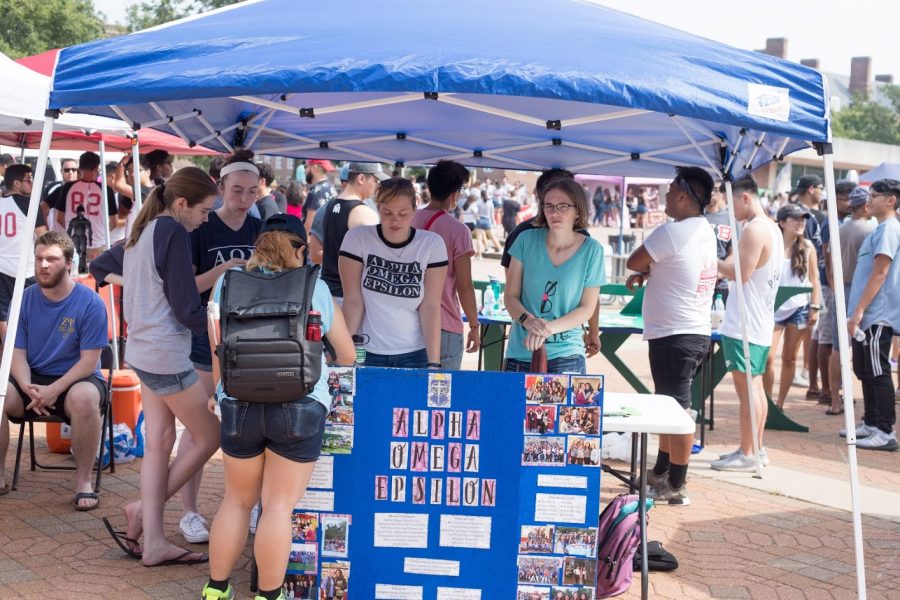 Representatives of the Alpha Omega Epsilon sorority give a potential new member information during Quad Day on Aug. 26, 2018.

Hey. Ex-sorority girl here. I wish that I didn’t feel the need to write this article.

After two long years of being part of a sorority, I have finally made the decision to leave mine. While I have made some great friends within my sorority and remain in touch with them still as I am typing out this article, I can say that dropping my sorority was one of the best decisions I’ve made. The pros of being in a sorority were existent, but they were far outweighed by the cons. People are saying that sororities and fraternities are dying out. The pandemic isn’t making things any easier for Greek life. But as sad as that is, I clearly see why.

I came from a family that encouraged me to join Greek life, so naturally, I developed an interest. My brother was in an “upper-tier” fraternity here at school. When I was a freshman, I was on the fence about going through recruitment. I wanted to make friends. Greek life seemed like the only way to go to social events and branch out. But still, a part of me was unsure. Whenever I asked others what being in a sorority was like, all I heard was the usual crap about meeting your “perfect sisters” and running home to the house you love and blah blah blah, among other sunshine-and-rainbows sisterhood nonsense. But nobody ever told me about all the god-awful and outdated flaws sororities have. Usually, I was just told that every house was different, and you can’t generalize. Bottom tier house, top tier house, they all have the same flaws — some more so than others. I wish somebody had told me the following things before going into Greek life so I knew that it wasn’t right for me.

If you didn’t already know, being in a sorority at UI is really, really expensive. During my time in my sorority, we were sometimes given out fines. You might ask, for what exactly? Pretty much anything, really. Can’t make a chapter meeting or philanthropy event and don’t have a valid excuse? That is a fine right there. Don’t have a certain clothing item in time for recruitment? Boom. Another $10 charge. Of course, with the pandemic, fines might be done away with. But if you are somebody who doesn’t have money to blow, then maybe this isn’t for you.

It is absolutely astounding how out of touch sororities are with current times. Unlike fraternities who basically are free to do whatever they want, sorority members have to follow silly and blatantly sexist rules. During recruitment, girls are required to wear a full face of makeup and act a certain way. In addition, there are a lot of rules about what girls can have in their rooms during recruitment. A friend of mine was forced to take down a picture of her with two other guys. Having one boy in a picture is okay, of course, but one girl with two guys? Absolutely unacceptable for a girl, because apparently, PNM’s (potential new members) don’t want to see something like that. Why can’t sororities be like fraternities? In fact, it would be safer that way instead of having girls go to fraternities for the parties.

And don’t get me started on the letters. You wanna wear your letters out to class? Don’t look like a slob. Want to wear your letters while going out and having a fun time? Nope. Can’t do that, because we can’t let the public know that girls drink — and it’s trashy. And don’t you dare get pictured in your letters while going out and put it on Instagram, or else we will kick you out and the entire sorority will be put on probation. Oh wait, but fraternity guys can — they’re boys. Boys drink. That’s fine.

The frightening lack of diversity

You would think that in 2020, sororities would be at least somewhat more diverse. From what I’ve observed in all sororities (this isn’t just exclusive to my former sorority), this definitely isn’t the case. Typically, how it works is that during recruitment, they really like to sell the fact that sororities are “all-inclusive.” Sure, there is the occasional African American girl, but that ratio is more like one African American girl for every 50 white girls, or maybe higher. And usually, those girls start to feel excluded and go on to drop the sorority. This isn’t just exclusive to sororities, it is rampant in fraternities too. It seems like sororities and fraternities like to treat diversity as more of a quota to fill, and that is completely unacceptable. In addition, it isn’t just the racial diversity that is lacking. LGBTQ+, neurodivergent and disabled members are just as underrepresented.

A sorority is no place for non-conformists

If you are somebody who hates conforming, you are not going to have a good time. This is something that I should have gotten right from the get-go. I won’t lie, I am a pretty eccentric and polarizing person. I do things my own way. I’m very independent. I hate having to rely on others and being told what to do. A sorority is the complete opposite from that: you have to conform. You are told what to do. You don’t wanna stand out, or you will be signaled out.  If not, you are going to be on the outside looking in, just like I was — an outcast. It was high school all over again.

Sororities are struggling, and they are going to struggle more than ever in our rapidly changing society. If you are still looking to go through recruitment even after reading this, I hope maybe things are different and your experience is a positive one. Just remember, college is a time to find yourself. I wish I focused on my hobbies from the start. You don’t have much time to experiment with your interests. If you want to join that club you are afraid of joining (underwater hockey, Dungeons and Dragons — whatever, you name it), do it. Do it, do it, do it, do it. Because as a junior, I really, really, really regret not doing the things I wanted to do from the start just because I felt too invalidated. Fuel your intellect and fuel your passions. Don’t waste your time being something you are not, because otherwise, it will just suck your soul bone dry.