Science of slowing down time during a pandemic 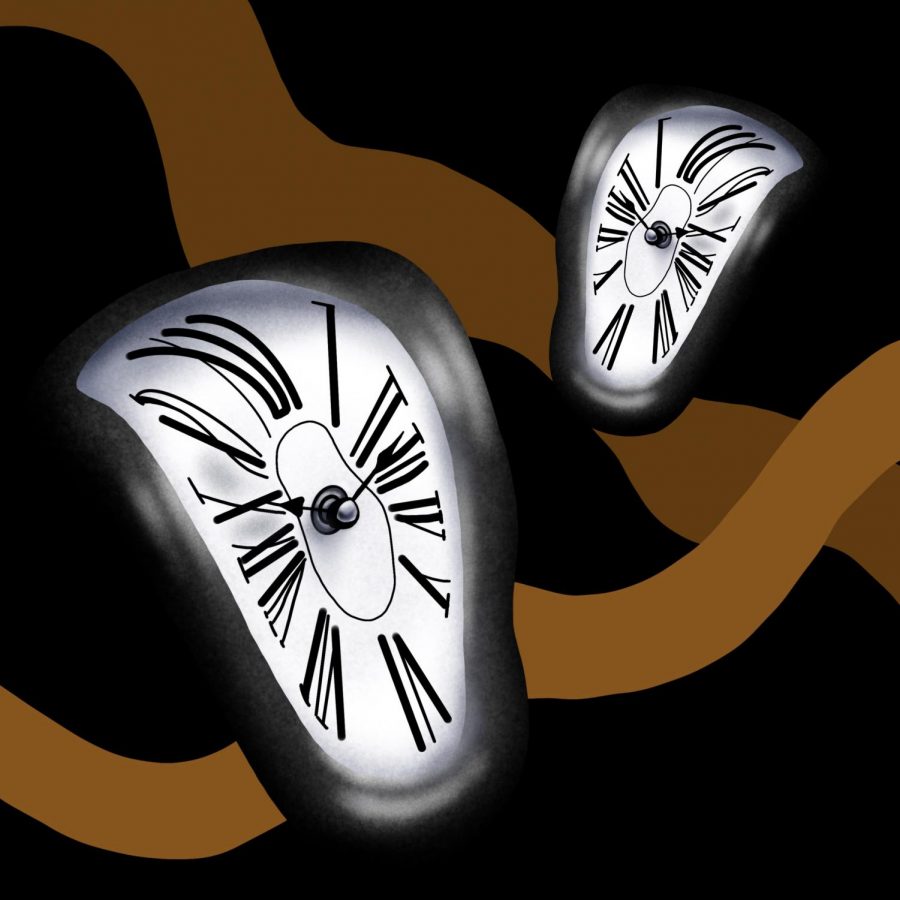 When the pandemic hit the U.S. in full force back in March, it seemed as if everyone was fighting a battle on two fronts: one against the virus and one against time itself. Schedules were abandoned, calendars were ignored and people hunkered down indoors. During the first few weeks of lockdown, people commonly joked that the most useless purchase of 2020 was a calendar.

The first months of lockdown seemed to drag on forever. Days seemed to blend together, weeks unfolding with no distinction between the weekday and the weekend. A lifetime of history happened while the typical person did nothing but stay in their house. And then, as lockdowns and restrictions began to lift, people would look back and say to themselves: “Where did the time go?”

Benny Libman, fifth-year senior in Media, felt that the pandemic warped his sense of time, and several of his peers agreed as well.

“The days go slow, but the weeks go fast,” Libman said. “Every day takes forever to get through on its own, but I can’t believe it’s September already. We’re all knocked off our routines, and we’re all sort of going through the same phenomenon of being stuck at home or social distancing.”

The obfuscation of time throughout the pandemic can be attributed to the way we perceive time normally, and, in turn, how that sense of normalcy has been disrupted. Dr. John Hummel, a professor of psychology at the University, studies attention, perception and the processing of relations. Hummel offers an explanation as to why this phenomenon of warped time has occurred for so many during this time.

“Our sense of time is basically organized around the events that fill it,” Hummel said. “Normally, our lives are filled with events like going to work and whatnot that happens in specific times and at specific places. This structure organizes our memories of those events and when they occurred, but what happened when the COVID crisis hit, and we’re all social distancing and staying at home, is that all that spatial and temporal structure was just thrown out the window.”

According to a recent survey by the Public Library of Science, a UK-based science journal, 80% of those who answered experienced changes to their perception of time since the COVID-19 pandemic began. Hummel’s explanation, coupled with this data, makes it clear that when typical spatial and temporal structures are removed from day-to-day life, the result is a complete restructuring of the way we perceive time.

“Time becomes like this soup,” Hummel said. “There are little events floating around — like that time I dropped the glass in the kitchen and broke it, or that meeting with the committee or what have you — but they all happen in the same space with no clear spatial or temporal markers to distinguish them, so they’re hard to keep separate from each other, they just float freely in this undifferentiated temporal broth.”

With a majority of classes being online and only a few meeting in person, this school year poses a new question: How do students keep track of assignments and deadlines while time itself still feels warped? Kenzie Rutledge, sophomore in DGS, feels that the pandemic and online classes have made it harder to keep track of her weekly assignments.

Rutledge has an asynchronous kinesiology class with quizzes every couple of days that take place during normal class times.

“I’ve missed this quiz twice due to losing track of time. Thankfully my professor is very understanding and was able to extend the deadline for me,” Rutledge said.

Rutledge said her classes have forced her to reorganize her schedule, figure out when she needs to meet for class and determine when she has to complete assignments. She said there have been times she’s working on assignments for one class in the library, and she gets so focused she will miss another class she is supposed to sign on for.

Rebecca Eng, junior in LAS, has noticed that although online classes have given some sort of temporal structure to her day, the nature of the classes makes it hard to focus.

“When I have classes, time passes a little faster,” Eng said. “In March, when we first had online classes, it was stressful so I’d nap all the time, and it seemed like the moment I got up there was a deadline I had to race towards. With online classes (this school year) I feel like I’ve been slacking off a bit on my assignments. It’s really hard without someone engaging you, it hard to engage with a screen and with their videos off. Even if you do zone out in (normal) class, there are still some social behaviors you are expected to conform to that kind of hold you accountable.”