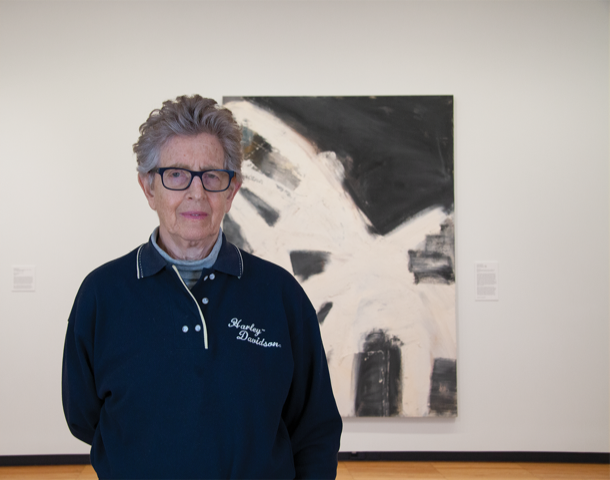 Louise Fishman, who received her M.F.A. in painting and printmaking from the University in 1965, poses in front her painting during a campus visit in 2019. Fishman passed away this July only a month before Krannert Art Museum’s newest exhibit dedicated to her work was set to open.

Amy Powell, Krannert Art Museum’s curator of Modern and Contemporary Art, was putting the finishing touches on Louise Fishman’s exhibit when she got the news.

Fishman passed away on July 26 — just a month before the exhibit was scheduled to open.

Louise Fishman, who graduated with an M.F.A. in painting and printmaking from the University in 1965, was a world-renowned abstract expressionist artist. Fishman was born in Philadelphia, Pennsylvania but spent a majority of her career in New York.

Krannert Art Museum debuted “A Question of Emphasis: Louise Fishman Drawing” this August. Throughout KAM Fest, an annual Welcome Week event held at Krannert Art Museum, hundreds of students had the opportunity to see the new exhibit and the work of the distinguished alumna.

Powell said she debated whether or not to change all the art descriptions to the past tense. Instead, she said she decided to keep them in the present.

“I realized that the work itself is so strong and it’s already memorializing her in a very strong way that I didn’t need to add on to,” Powell said .

Fishman entered the abstract expressionism sphere and injected her own feminist spin on the male-dominated specialty throughout her lifetime, according Powell. Fishman’s work often drew on her identity as a queer, Jewish woman.

Laurie Hogin, associate director of the School of Art & Design, said abstract expressionism has historically been a male-dominated style of art.

“I would say that there were plenty of women practicing abstract expressionism in Fishman’s generation, but they just weren’t necessarily getting their due or being included,” Hogin said.

When she looks at Fishman’s work, Hogin said she sees a desire to be recognized as a woman in a male-dominated space.

“I think that one of the things that Louise brought to the table was a level of determination,” Hogin said. “I look at the work and I think about her strength and her agency in making herself heard.”

Gerry Hayes, an American painter who received his M.F.A. from the University in 1966, met Fishman while they were both M.F.A. students living on campus and they became friends. Hayes said that many students interested in contemporary art banned together to discuss the art that was happening in New York.

Fishman was more experienced in art than many in the small M.F.A. group of 20 students, according to Hayes. Throughout their friendship, Hayes said her sense of self was constantly inspiring.

“I was always impressed about how she could fearlessly start a painting without any hesitation and just work it out as she developed the work,” Hayes said. “She was just sure of herself.”

Although Powell said Fishman didn’t like most of the instruction she received from professors at the University, she said her cohort of friends meant the most to her.

Hailing from the East Coast, Powell said Fishman told her how she didn’t feel like she fit in at the University a lot of the time. According to Powell, Champaign-Urbana was the farthest west she ever lived. Powell said the racial segregation she saw here stunned her.

“She noticed how segregated things were here,” Powell said. “And that made her uncomfortable because she didn’t support or want to be in a racially segregated environment.”

Once she graduated with her M.F.A. from the University, Fishman moved to New York. In 2012, she married Ingrid Nyeboe, a graphic designer, in New York City. Nyeboe is now the studio manager of the Louise Fishman Studio.

Although Powell was able to fly to New York and visit Fishman and Nyeboe many times, she said there’s still so many things she would like to know about her and her time at the University.

“I still have lots of questions for her,” Powell said.

Hayes said he saw her work change throughout her life. He said many artists try to curate a brand and stick to the same style for the rest of their career. But Hayes said Fishman was constantly trying new things and evolving her style of art over the years.

“A lot of artists do the same painting over and over for their entire life,” Hayes said. “But someone like Louise would not hold back in terms of changing.”

Although he stayed in contact with Fishman, Hayes said he had spoken to Fishman about her coming to visit him soon.

“I had so much hope of seeing her again and talking to her face to face after all that time,” Hayes said.

Hayes said he still has an old lithograph that Fishman made while they were at the University together, and he’s followed her work throughout the years.

With the exhibition at the Krannert Art Museum currently on display for the campus community, Hayes said he believes everyone, no matter their taste, can find something to enjoy in her work.

“I feel like there’s something there for almost everyone,” Hayes said. “Any student or anyone that looks can find something that could be inspiring or impressive in their own work.”