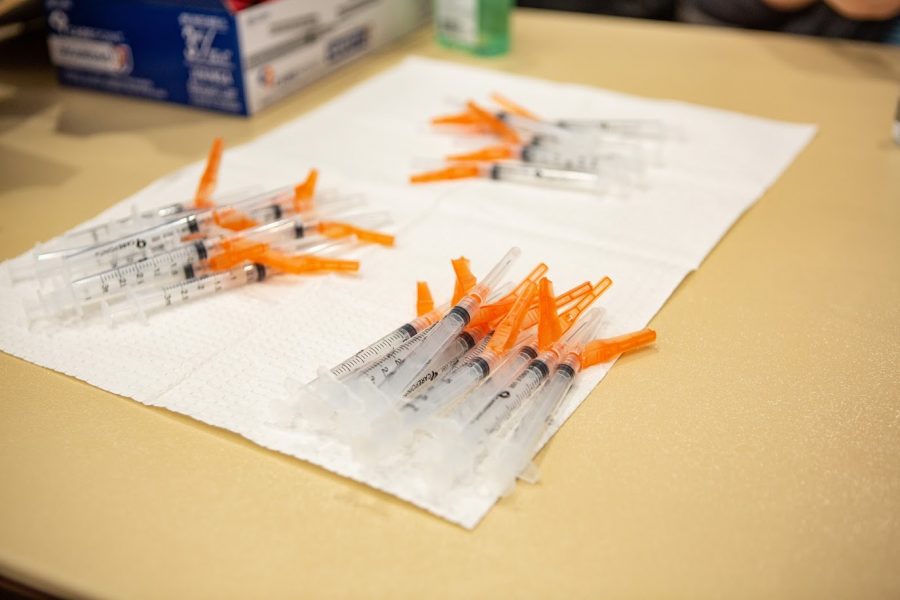 Needles wait to be filled with the Moderna COVID-19 vaccine at the I-Hotel on Jan. 12. The vaccine is now limitedly available to eligible students.

Student employees across the University have begun receiving the COVID-19 vaccine due to new eligibility guidelines allowing in-person employees to receive the vaccine.

Students who’ve been vaccinated report minimal side effects, and hope to set an example for those yet to receive the vaccine.

A Massmail was sent on Jan. 29 informing the campus community of this wave of eligibility, with those eligible receiving a subsequent email containing more information on how to schedule a vaccination appointment. This wave of eligibility is the first to include a significant portion of the University is student body.

Student response to the Champaign-Urbana Public Health District’s vaccination program has been positive, praising the program’s organization and efficiency.

Once eligible students were notified they could receive the vaccine, they were directed to sign up for an appointment time at one of the various campus vaccination locations, including CRCE and the iHotel — the latter serving as the current vaccination hub for the campus community.

Tara Leininger, sophomore in LAS, received the vaccine on Feb. 2 due to her position as a Resident Advisr for University Housing. After receiving a signup sheet by email on Jan. 29, Leininger signed up for a vaccine appointment and made the trip out to the iHotel. Leininger was surprised by the efficiency of the vaccine program.

“I didn’t know what to expect going in, but once I got there it was pretty streamlined,” Leininger said. “It was hectic because I talked to like four different people. I came in and someone checked me in, someone else took my temperature, someone else took my paperwork, and I talked to someone else who sent me to the nurse who gave me the shot. I felt like I was doing a lot, but they moved me around in the line pretty quickly so it didn’t take that long even though I felt like I did a lot.”

Leininger received a dose of the Moderna vaccine during her appointment. The CUPHD has supplies of both the Pfizer and Moderna vaccines, with students receiving whichever is available. Each vaccine’s side effects vary from person to person. Leininger said she was fortunate to have mild side effects and emphasized that the side effects do not outweigh the positives of receiving the vaccine.

According to Leininger, the only side effect she felt was a sore arm. After receiving the vaccine around 3 p.m. on Tuesday, her sore arm lasted through Wednesday, but she was able to manage the soreness with a dose of Tylenol. By Thursday, she was back to normal.

“Obviously, my experience doesn’t speak for everybody; I know some people had way worse side effects, but even my friends who did have worse side effects were fine by (the day after),” Leininger said. “It’s worth it.”

Zain Bando, junior in Media, was able to receive his first dose of the Moderna vaccine at CRCE on Jan. 27 as a resident of Beckwith. Bando said his experience was overall seamless.

“The people there were nothing but respectful and kind regarding our concerns and what our needs were,” Bando said. “It was a super easy process. Pretty much the only lingering effect that I had was that I had a bit of arm pain which subsided with some recovery medicine afterward.”

In addition, Bando said he felt slightly fatigued after the process, but he was still able to function regularly throughout the rest of his day.

On March 4, Bando will receive his second dose of the Moderna vaccine. He added that while he will feel more protected from the virus after the second dose, he will remain vigilant, continue to social distance and wear facemasks.

Even though many are rushing to get onto waiting lists to receive the vaccine, some are still unconvinced of its effectiveness and safety.

Bando said while he understands some people are hesitant, receiving the vaccine is a step in the right direction of returning to a sense of normalcy.

“I hope that if people are considering getting the vaccine, they can look at personal stories like mine and say if he can get it, and I have the opportunity to get it and protect my fellow peers, then I’m going to do everything I can to ensure that I’m being as safe as possible,” Bando said.

Angelina Hwang, sophomore in AHS, works in the Illini Emergency Medical Services program as an Emergency Medical Technician. In addition to her work as an EMT, Hwang studies Interdisciplinary Health Sciences, building her knowledge of the medical field.

Hwang was vaccinated on Jan. 19, receiving a dose of the Moderna vaccine. Similar to Bando and Leininger, Hwang’s only side effects were a sore arm and some slight fatigue. With her work and academic focus within the medical field, Hwang spoke about how the vaccine’s use of antibodies can contribute to the severity of each individual’s side effects.

“The way the vaccine works is mainly through antibodies,” Hwang said. “Let’s say you had COVID before, and already have the antibodies in your system. One of my EMT friends actually did, he felt really bad flu-like symptoms for almost exactly 24 hours after the first dose, since it acted like a booster. Still, he was back at work the next day and he was totally fine, which I thought was really cool. Because I didn’t have COVID, I would expect to get more severe symptoms after my second dose because then it works as a booster.”

It will be a few months until the rest of the campus community will be eligible to receive the vaccine, with most experts predicting the majority of students will be able to get vaccinated by April or May. Despite this, the first wave of student vaccinations brings about hopes for what campus will look like when things return to normal, whenever that may be.

“The first thing I’ll do when everybody’s vaccinated is I want to eat inside Jarling’s,” Leininger said, referring to Jarling’s Custard Cup, a frozen custard shop in Champaign. “You can’t sit outside in the cold, it’s been a long time since I’ve been in, and I miss that place.”