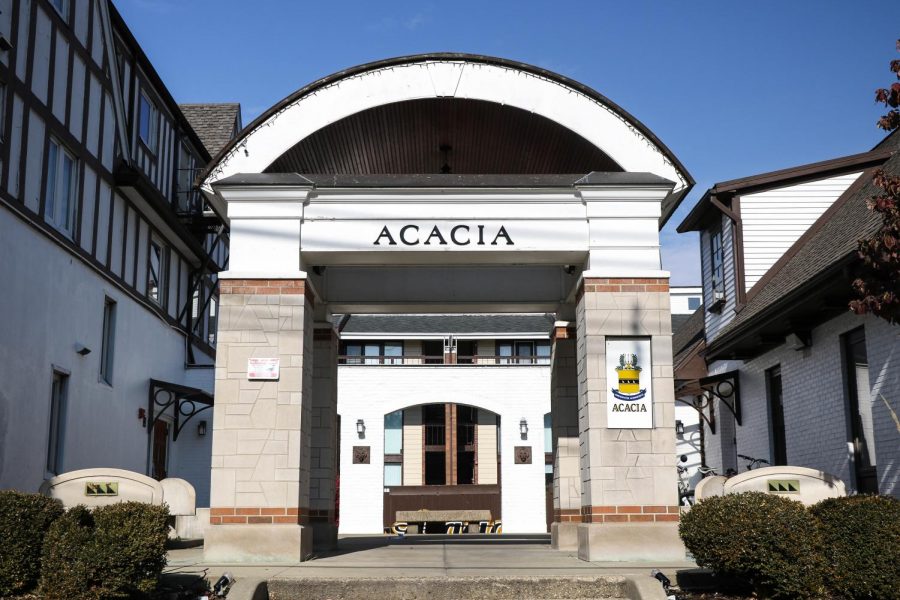 The Acacia Fraternity house is shown at 302 E. Armory Ave. on Sunday. The fraternity recently took responsibility for a string of stolen decorations across the Champaign-Urbana area.

Throughout the month of October, many residents of Champaign-Urbana began to notice their Halloween decorations were disappearing from outside of their homes. Although this is something that happens every year between Halloween and Christmas, this year, the thieves were caught.

The missing objects ranged from small decorations to larger and more expensive items.

Some victims of the theft decided to move on, choosing to redecorate their houses. Others, however, took action, publicly speaking out on the issue.

Lindsay Jordan, a mother and resident of the area, created a post on Facebook on the off-chance someone may have seen her family’s stolen decorations around town. It received hundreds of comments and media attention. Upon seeing the post, others started to come forward with their own stories of disappearing decorations.

Jordan, as well as many others, brought legal attention to the case and filed a report to the local police in the wake of the first theft. The police have been in contact with the victims of the stolen property since.

“I believe someone saw something,” Jordan said. “The parties are over and they’ve had their fun at the expense of my family and many others. Now is the time to make it right and return what isn’t theirs.”

Following the reports of the thefts and the large presence on social media they gained, the Acacia Fraternity at the University admitted the fault of some of their members. They have since released a public statement through email.

Upon reading the fraternity’s statement, Jordan said she felt insulted, and she doesn’t believe anyone is being held accountable. She said members of the fraternity walked up to her house on two separate occasions and took whatever they wanted, disrespecting her family and their property.

“When your motto is ‘Human Service,’ you should hold your members to a much higher standard,” Jordan said.

The thefts have changed the way many local residents decorate their homes for the holidays. Many have been posting online about implementing security cameras, with some even discussing the possibility of setting up booby-traps near their decorations to prevent future incidents.

Jordan said she thinks because of the thefts, many people will be much more hesitant to decorate for the holidays in the coming years.

“We all enjoy the decorations, especially the neighborhood children,” she said. “There is a sense of unease and paranoia. We are all a lot less trusting.”

The Champaign Police Department did not respond in time for publication.