Lovie, Illinois football can only look to future now 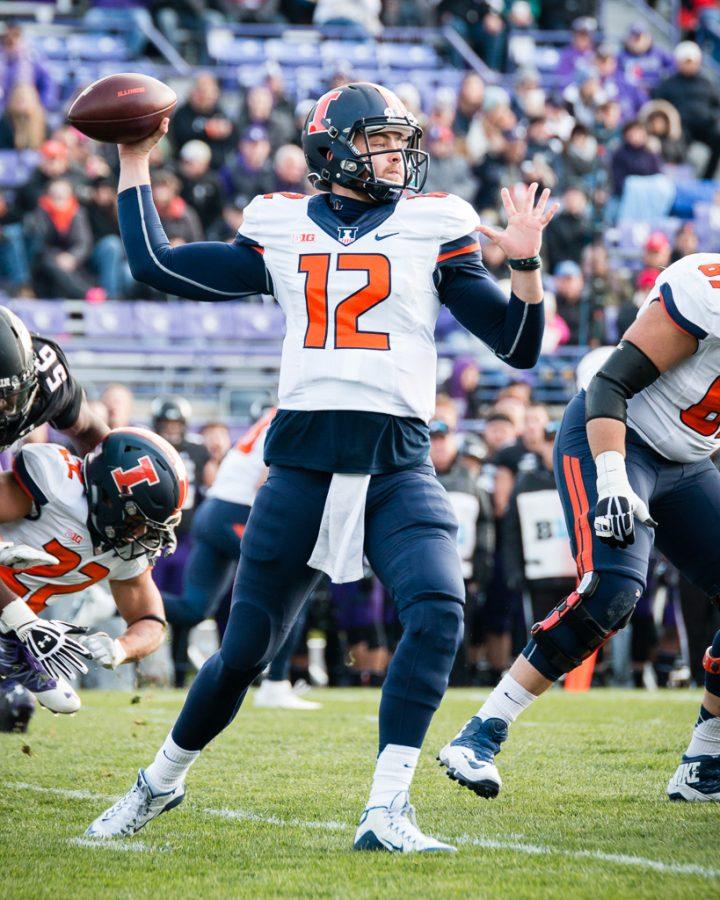 Illinois quarterback Wes Lunt (12) passes the ball during the first half of the game against Northwestern at Ryan Field on Saturday, November 26. The Illini are down 21-14 at halftime.

After another fall of typical Illinois football, Illini fans can finally breathe a sigh of relief and think about next season or at least Illinois basketball — oh wait.

Better yet, thinking about next year for both doesn’t sound too bad.

As the football coaches have said since what seems like the start of Big Ten play, this season was all about preparing the foundations for the future.

But it was also a theme from the day Smith was hired — a huge change that represented closing the book on Illinois’ chaotic year and looking forward to scandal-free years ahead.

It comes hand in hand with recruiting from a new talent base and attracting them with state of the art facilities. The reality is that to get good players, universities need to have good facilities — it’s a reciprocal relationship.

This season is a reminder that changes take time, and complete overhaul doesn’t occur with one magic hire. Illinois’ future should be bright, but fans shouldn’t expect change overnight. It will take time, and the effects might not be seen until a few years down the road.

Looking forward was a way of getting through what was happening on the field because the field product was confusing. At times the defense seemed in sync. Then it was the offense that looked better. Or it was neither.

By the final few games this season, everyone seemed ready to let go and look ahead.

Smith had more wins in his first season than Tim Beckman, Ron Zook and Ron Turner all had in their first seasons.

In Saturday’s loss against Northwestern, the seniors stepped up.

Quarterback Wes Lunt had the second most yards of his career (377), finishing his time as an Illini ranked seventh in passing yards (5,900), seventh in completions (550) and eighth in TD passes (36).

Coaches have said the first year was important to have these seniors, they were a crucial part of the rebuilding effort.

They will come back knowing they were a part of the change in culture, looking to the future.

And maybe that’s enough for this year.

When these seniors look back, hopefully they can say they were at Illinois for some crazy years: from the lowest point to the turning point. At the least, hopefully it is once again relevant, this time for the right reasons.