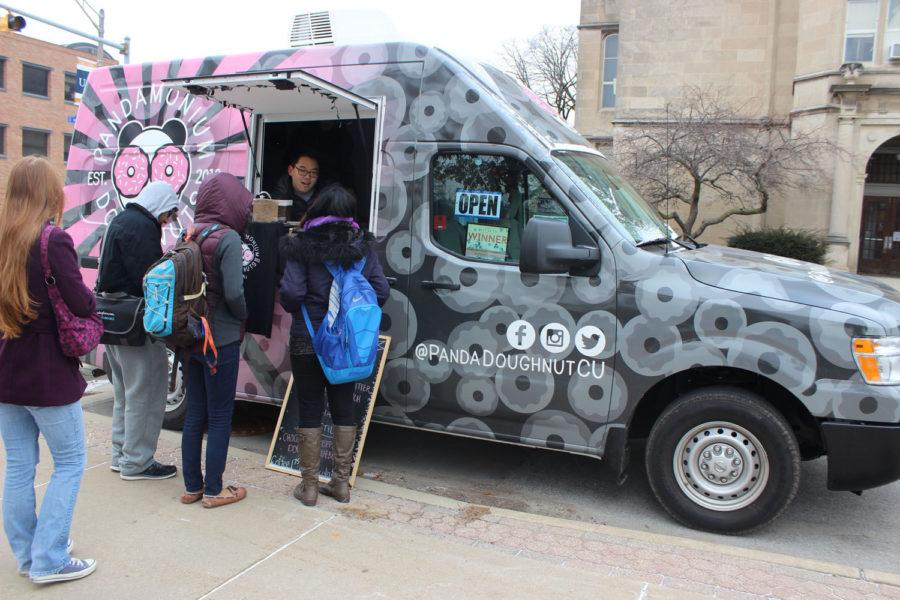 Pandamonium Doughnuts, a gourmet doughnut food truck, has been serving Champaign-Urbana specialty handcrafted treats since its start in May 2013. Pandamonium will be opening its first permanent location in Savoy later this year.

Food trucks are like an oasis of satisfying, fast food for hungry students who need to grab something quick during a break between classes or after a late night out. Luckily, the Champaign-Urbana area has plenty of choices.

There are about 25 different food trucks that pop up at farmer’s markets and festivals, but the University has a few reliable favorites.

These trucks serve a wide variety of food from breakfast to late night snacks at different spots around campus.

The best way to know exactly where and when your favorite truck will be parked is to follow it on social media, but this list is here to break down the basics.

Cracked is arguably the most popular truck on campus. Demand was so high that it led to the creation of another truck to serve up its signature Mexican-inspired breakfast food.

A typical sandwich is usually between $5-7, but they are large and filling, with chorizo, hash browns and, of course, eggs serving as staples. Though the sandwiches hold their own, the tater tots are a real gem, particularly the foodie-adored parmesan-truffle tots.

The trucks can typically be found on Mathews and Springfield and in front of Krannert Center for the Performing Arts on Goodwin and Oregon in the morning from 8 a.m. – 2 p.m.

On weeknights, especially Thursday and Friday until a little after 2 a.m., a truck is typically staked out in front of Joe’s Brewery, making it a great alternative to McDonald’s cravings.

Pandamonium Donuts is another breakfast favorite, crafting a limited amount of made-from-scratch doughnuts since 2013.

The inventive flavors like Cereal Killer and s’mores, plus vegan options have endeared the truck to the C-U community.

The truck offers an ever-changing selection of about five types of doughnuts every morning around 7:30 a.m. in front of Krannert on Oregon and Goodwin – across the corner from Cracked. They typically stay until the last doughnut is sold, but popular flavors sell out quickly and there’s no restocking.

For a more traditional breakfast or lunch option, Derald’s food truck is the way to go.

The Illini-proud orange and blue truck’s owner, Eric Seeds, said that it’s been serving C-U for over 30 years, and the breakfast sandwiches and burgers are timeless. “The Daily Double” breakfast sandwich is a favorite of the Illini football team, and many sandwiches on the truck are nicknamed for past players. Derald’s also owns Ye Olde Donut Shoppe and serves classic donuts as well.

Derald’s has apparently been at the same spot between Noyes Lab and the Quad on Mathews since it opened.

The last option is basically late-night exclusive. Burrito King, the mobile version of the Green Street location, has a shorter menu and shorter lines.

Nachos, tacos and burritos – including the signature “Burrito King” – are all available. It’s a little harder to locate because it does not have dedicated social media, but it’s more likely to be found outside of Joe’s Brewery – especially if Cracked isn’t there that night – or in Downtown Champaign near the Accord.

Lillian is a junior in Media.
[email protected]