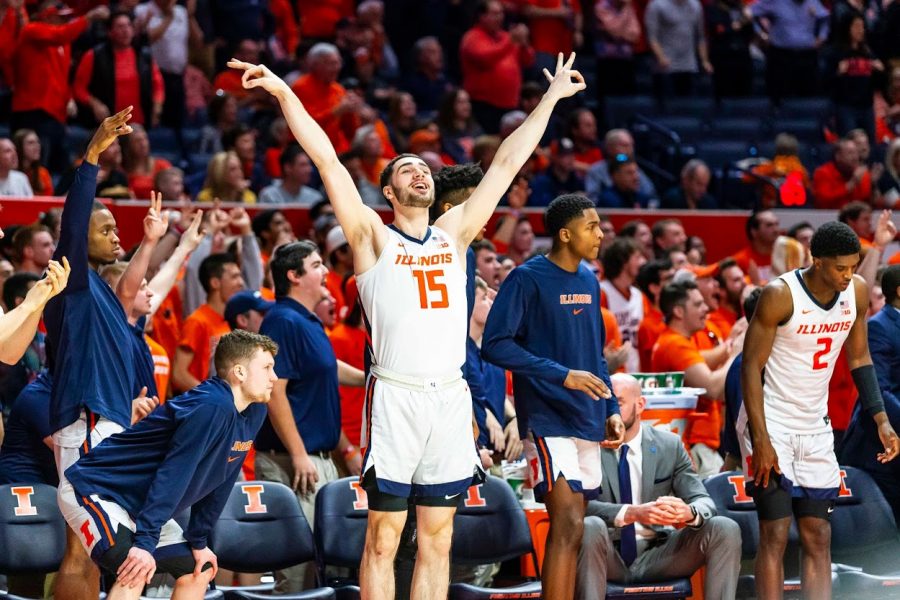 Junior Giorgi Bezhanishvili celebrates during the game against Iowa March 8, 2020. Bezhanishvili announced Thursday afternoon that he is departing the Illinois basketball program.

Junior Giorgi Bezhanishvili announced Thursday afternoon that he will be leaving Champaign and declaring for the 2021 NBA Draft, joining teammate Ayo Dosunmu after he made the announcement Tuesday.

“From basketball to classes to dancing, it has been nothing but love since my first day here in Champaign!” Bezhanishvili wrote in an Instagram post. “I would like to thank all of Illini nation from deep in my heart for everything! My journey here at Illinois has been amazing. With that being said, I will be entering the 2021 NBA Draft and pursuing the next step of becoming a professional basketball player. Thank you so much to everyone who has helped me along the way. I’m excited to see what the future holds.”

Bezhanishvili’s production dipped over the last two seasons after a sensational freshman year, when he started all 33 games and averaged 12.5 points and 5.2 rebounds per game. Last year, the Georgia native finished with 5.1 points per game and did not ever feature in the starting lineup.

The junior forward is the third Illini to announce their respective departure from the program, joining Dosunmu and freshman Adam Miller, who announced last week that he will be entering the transfer portal.

Florida transfer Omar Payne should help fill in Bezhanishvili’s production, though Illinois is expected to make more moves in the transfer portal.