On March 13, Lindsay L. Johnson was found by University Police near the music building after allegedly murdering her infant son in Bousfield hall.

This pre-trial hearing is the most recent development in an ongoing investigation involving the sophomore in ACES.

If convicted, Johnson faces a 20- to 60-year sentence for first-degree murder, as well as 10 to 20 years for a child endangerment charge and two to five years in prison for the concealment charge.

Initially on March 13, University police headed to Bousfield hall after receiving a call around 5:00 p.m. about a student who had been in the bathroom for several hours. After arriving, they found Johnson who told officers she had the stomach flu and did not need help.

The officers left, but returned to Bousfield Hall around 7:30 p.m. after receiving additional calls about a woman who might have given birth to a baby in a bathroom.

Less than an hour later, officers found Johnson by the music building. UIPD moved her to the University’s Public Safety Building where she was questioned.

When initially questioned, Johnson claimed that the baby was not breathing when born. But after further inquiry by UIPD, she admitted the baby was born alive and had been crying.  Her comments suggested that she covered the baby’s mouth with a towel to stop it from crying.

Johnson admitted that she had hid the body under her bed when the police first arrived at Bousfield. She told UIPD she was unaware of her pregnancy until she went into labor that day.

However, phone records show that she had previously searched for information related to pregnancy symptoms and home abortions. Johnson also searched how to manage physical sign of pregnancy after the loss of a baby.

The on-going investigation sparked response from the University

“I don’t think anyone could ever imagine anything something like this happening on campus,” Pat Wade, UIPD spokesperson, said. “The police officers see a lot of bad stuff, and this is right up there with the worst of it.”

There will be a hearing for the McKinley records on June 2. The autopsy of the infant is still under the supervision of Coroner Duane Northrup. 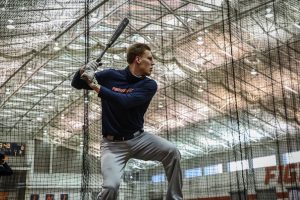